I’m glad Art is dropping his lawsuit and I’m delighted that we will have three new school board members. With any luck the people of Duluth will soon see what a high functioning school board can do. But we will still be left with the School Board ethics policy of an extremely low functioning, back biting, school board. Its a policy that proclaims that we can get rid of any member who deigns to tell the public any dirty little truth that the board majority wants hushed up or that sheds any light on the Board’s grubby workings.

I’ve lost count of the times I’ve been warned either through our stellar attorneys or through our Human Relations Officers that I am treading on private data. Yes we have custody of lots of personnel files that has information that deserves protection from prying eyes. Its violation has cost a few police officers their jobs when their curiosity has got the better of them and they decided to peruse state arrest records to learn about their girlfriends.

But revealing the often benign contents of a personnel file is not a hanging offense that automatically results in a firing. In Minnesota there is a provision that allows a fine of up to $15,000 to be levied against someone who reveals private data. I don’t know how often this fine has been levied at its maximum. I’m sure some blabbermouths have gotten little more than a hand slap. Now, however, our school board has passed a new ethics policy which gives them the right to remove Art or me from the School Board if we share any information with the public that they want to keep hushed up. The lengths they’ve gone to enforce silence have been extreme.

For instance, when we interviewed the handpicked attorney, Mary Rice, to investigate Art Johnston’s conduct last December (That was the meeting where I made an ass out of myself trying to pantomime Art Johnston’s much ballyhooed “shove.”) I was hamstrung by Chair Miernicki and our attorney Kevin Rupp. Together they did everything in their power to prevent me from asking frank questions of investigator Rice. I wanted to mention Art Johnston’s wife/girlfriend/lover/spouse/partner in my questions and kept being advised that this was dangerous territory because it violated data privacy laws. Hell, Jane Bushey’s name, picture and story had been on the front page of the Duluth News Tribune. It was hardly private anymore. Even so, I was advised not to mention her name. I then asked if I could get Jane’s permission to mention her name. In no time she sent me a slip of paper giving me her blessing. Even this was too much for my minders.

Don’t be fooled. My mentioning Jane Bushey was not the real issue. The name they didn’t want uttered was Jane Bushey’s boss, Cheryl Lien. There. Now I’ve done it! According to our new ethics policy – the unconstitutional one that Art has chosen not to contest in court – this makes me subject to removal by our School Board.

The District’s chief aim though this entire nightmare has been hide the District’s doings while fussing about how dangerous Art Johnston has been. Sadly, a lot of people in Duluth, including the editors of the Duluth News Tribune and at least one candidate have fallen for this claptrap. Now that the court case is in our rear-view mirror I will put this sordid little episode under a microscope.

Thou shalt not rat out our friends is a school board commandment I intend to violate often over the next week or two. Here’s a good visual of the commandment in action. I posted this heavily blacked out page from the “Rice Report” on my blog last fall. It’s so thoroughly redacted the CIA couldn’t figure out what Art Johnston’s crimes were. 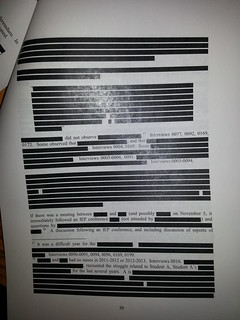 Like so much else in the Art Johnston saga, this was simply another attempt to hide behind the law and keep all the damning evidence obscured.

This summer when Cheryl Lien requested a continuance of her leave of absence from the District so that she could hold on to the possibility of getting her job back her dear friend Chair Mike Miernicki defended her. That’s because Art and I proposed that her name be removed from the list of leaves to be extended. Mike said, “This is a well thought-of educator, a Goldfine Gold Star winner.” True enough. But this Gold Star educator also gave the Duluth Schools a year-and-a-half long donnybrook that has led to the humiliation of the entire school board. This not the first time Cheryl Lien’s dark side has made an ugly appearance. I got a sneak peak at it when I was serving on the School Board twelve years ago. If I spill those beans I’m subjecting myself to removal from the Board.

Ah the hell with it. Half of the Denfeld neighborhood already knows about this, and besides, the truth is its own reward. That will be part two tomorrow.

Next: Thou Shalt Not 2 (Removed at Art’s request but with some explanation)