At last night’s school board meeting (about which much could be said) other than the Trib’s take that we are getting past the bad old days of teacher layoffs, Art Johnston passed out several graphs related to student enrollment.

Art passed the graphs out during our discussion of student enrollment but they only got as far as the Chair before Ms. Seliga-Punyko announced that they should not be looked at because they were not reviewed in advance of the meeting. They got no further than Clerk Rosie Loeffler-Kemp who hung on to them before they could get to the rest of us. Mike Miernicki began making his usual huffing and puffing noises fearing the worst. WADM’s discussions (showing a continued decline in students) always drive him nuts. When told they would not be passed out Art announced that he would pass them out himself. This grevious threat prompted Clerk Loeffler-Kemp to let the graphs resume their progress to the rest of the School Board.

I found this graph the most telling: 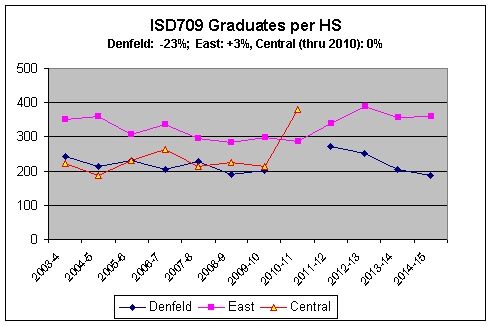 The graph shows the number of graduating students at the three high schools year by year from before the merger until well afterwards.

You can see that prior to the merger Central and Denfeld had about the same number of graduates between them as East High did. Then they merged and the student population was whipsawed back and forth between Denfeld and Central at the same time as teacher cuts and aggressive staff rearranging. Afterwards that figure drops as Central students opt for East and/or go to Hermantown, Proctor or drop out. This perfectly confirms the contention of my young friend, Karl Schuettler, that the Red Plan’s transition poisoned the well from which we are still drinking. (that last phrase is my take and at variance with Karl who is inclined to think that the Red Plan is over and done with.)

The Red Plan’s greatest damage came in the disruption it caused for so many students, fostering just enough chaos to drive many from it for good. The vicious cycle goes from there. It was school restructuring as shock therapy, as it took the axe to neighborhood schools and gave Duluth a bunch of pretty, hulking shells with large attendance areas. (What better exemplar of the trend than the new Lincoln Park, which lords over the west side at the top of its steep hill, nearly inaccessible by foot and drawing from Kenwood to Fon du Lac.) In a laboratory the new lines and divides would have been fine, but the Dixon Administration and its allies failed to account for how their drastic plan would disrupt families’ incentives. The old order may not have been sustainable, but the rollout of the new one was poor, especially on the west side, where students were jostled from Denfeld to Central and back to Denfeld to accommodate construction. But even now that the dust has settled, East has added students in recent years, while Denfeld dwindles. The damage has been done.

If you haven’t read his full post yet I’d highly recommend it.

I wish that the Red Plan’s supporters would stop being so defensive about the obvious challenges their baby left us with. In some cases, as with our Board members who tried to rid themselves of Art Johnston, this defensiveness seems to have led to a cocoon of self delusion. I’m sorry but when a child of the traumatic transition commits suicide because of the chaos he endured because of it and we refuse to acknowledge the part the chaos played in his death we are not serving any good public purpose. That we wanted to minimize the bad press to help pass a referendum for a new levy for the schools is no excuse. Had we been more honest it would have offered voters all the more reason to pass the levy……to get past the chaos and return to normal.

Today’s story is the second recent story that makes it seem like ISD 709 is returning to normal but I don’t buy this conclusion. Our new normal is much reduced from what it was back when, like all the other area schools, we still had a seven-hour day. The chaos may be abating but not our want.