I woke up at two this morning and spent two hours pondering the wealth of material I have for March posts. My cup truly runeth over.

Even the modest three posts from two days ago attracted 477 visitors yesterday while I was busy adding more posting material in St. Paul. I figure it will take all of March to get it out. There is no telling how many visitors today’s front page story in the Trib about Art Johnston’s lawsuit will bring to Lincolndemocrat. I have a lot to say about that.

Art’s constitutional law attorney Steven Aggergaard was interviewed. Art told me a bit about him on our drive down to St. Paul yesterday. Art asked me about the old tabloid the Ripsaw and wondered if I had ever heard about a case involving it that went to the Supreme Court. He said Aggergaard had recommended the book. I thought back over the last twenty years when it was ressurected by a new generation of muckrackers in Duluth and could recall no Supreme Court Case involving it. 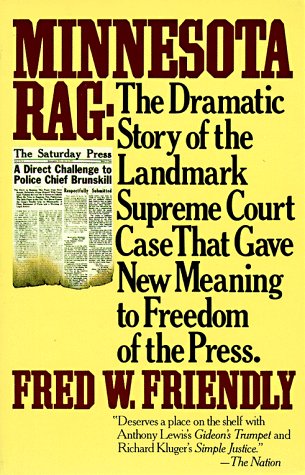 Naturally I googled it and discovered it was the Ripsaws original incarnation back in the 1920’s that had plead a first amendment case all the way to the Supreme Court. I was shocked to see that Minnesota Rag was authored by Fred Friendly one of Edward R Murrow’s old colleagues at CBS. Who knew that our little town was the seat of such an important case as Near vs. Minnesota. I studied that in Constitutional Law back in my college days.

Its not surprising that Attorney Aggergaard would be familiar with that book. He used to be the supervisor of the News Tribune’s editor Chuck Frederick. As they say in Disneyland “its a small small world.”

I’d like to start sopping up all that is spilling over my cup in the blog today but I’m going to play in the snow instead. I got an invitation I can’t pass up.