I’ve been visiting my father-in-law in Jupiter for twenty plus years. This is the City’s iconic image; the red Jupiter Lighthouse that was sited by Robert E. Lee well before the Civil War when Jefferson Davis was the Secretary of War. Today the city is in an urban setting with a million and a half nearby Floridians. From the air Florida’s coasts look like endless pavement peppered with swimming pools. I took this picture as we waited opposite the lighthouse for a boat tour of the Intercoastal Highway that runs from New Jersey down through Miami….or something like that. Along the water’s length runs the A1A Highway. 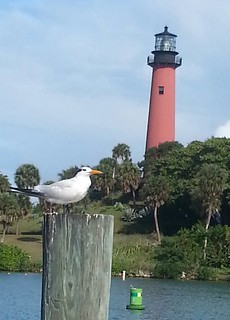 Our tour boat took us past the second, formerly the first, richest tract of land owned by high income homeowners in the nation. It also took us past postage stamp sized gems of undeveloped land. These fellows fly between the two but were chilling next to the tour boat waiting for someone to catch a fish. 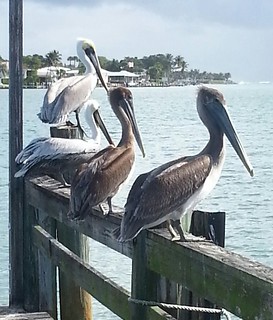 Among the many homes pointed out was that of the famous “Shark,” Greg Norman. Wikipedia says he was ranked as the world’s number one golfer for 331 weeks. This is his “dinghy.” His real yacht has davits (winches) that hold the dinghy up in case of of an emergency on the yacht. That came from our guide’s patter anyway.

Not everyone whose house was pointed out along the tour was that well healed. Poor old Burt Reynolds has a modest home on the poor side of the Intercoastal that the Fed’s are busy trying to take over to make up for Burt’s failure to keep up with his taxes. We finally visited his museum a couple years ago before it was torn down to make way for a huge development along a new walk way for tourists. Burt deserves better. I loved him the original “Longest Yard” movie. Of course, I was just out of college in 1974. It may be dated. 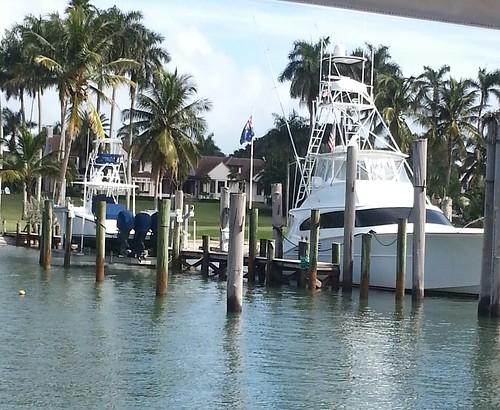 One of the postage stamps is called Blowing Rocks Nature Preserve. We visited it today but its blowholes were filled in with sand that clogged up its beach. The next big storm will clear them out again. Next we visited the Loggerhead Marine Life Center. It is set up to save wounded sea turtles and we saw a bunch of them in recovery. There were four species and I think the cutest one we saw was this little fellow, Munchkin, a juvenile Green that was almost bitten in half by a shark. The bite is the semi-circle on his back. 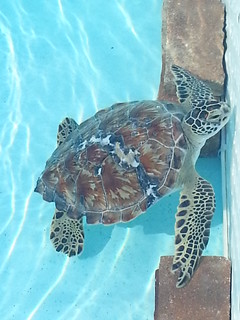 We spent our time there trying to talk my brother-in-law to volunteer. He was tempted.

Don’t envy me. We return to the cold on Monday and I’ll I’ll be back to the Duluth School Board and its ongoing, self inflicted travails.