Older women will remember the magazine Harper’s Bazaar. It was the inspiration for the store my Mother and a dozen other Mankato woman formed called Harpies Bazaar. They were the “Harpies” and they poured so much love and work into that store that it had a twenty year run as one of the most popular stores on Front Street.

Mom never made any money to speak of but it was rewarding work. She did the artwork for the ads and applied her years of decorating department store windows to arrange arresting settings for the goods they sold. Other than the sheer fun she had one of her few material rewards was the ability to buy items below cost. So every Christmas she treated her children to a late night buying binge at the store when it was otherwise closed to holiday shoppers. This was the first of two such binges we were treated to each Christmas. My Dad took us all to Musicland for us to choose Christmas Albums.

At the Bazaar Claudia and I always bought a new building for our “Dickens Village.” Our collection complete we always spread it out on my Grandmother’s grand piano where Mom practiced as a child and played American tunes for me to sing along with her. 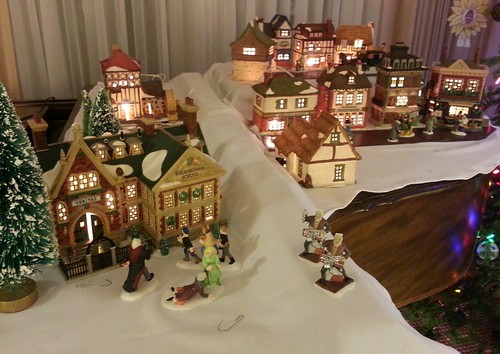 I mentioned some posts back that we have an extra Jacob Marley. Our grandson Jacob loves the Marleys. Yes, that’s two of them. You can see them placed forward. He really enjoyed the Muppet version of the Carol and he likes to move the two of them around in the village. We wince a bit when he does it. The figures are all ceramic. Of course, we also have two cats who sometimes take a stroll through the village so everyone in the community is at some risk during the holidays.