I had the house mostly to myself today as Claudia went to St. Paul to lobby our legislature with folks worried about the poor and homeless. It was also the week that Duluthians poured into St. Paul to lobby for Duluth. I got to stay home, read the news, grimace, finish Pardon Mon French – my next Reader column and finish Batman for my grandson. Here’s what will melt tomorrow in my front yard. 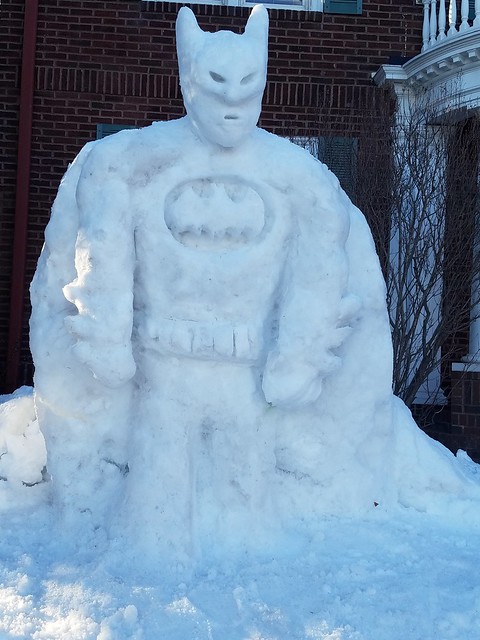 I also took a picture of a huge contrail over my house from a jet that circled twice. Wonder what that was all about?

I suggested that Claudia watch Hitchcock’s “To Catch a Thief” as part of our viewing of French movies to get us in the mood for our trip to France. Then Claudia watched the CNN coverage of voting results in Pennsylvania. The Democrat Lamb (not to the slaughter) running against the Republican Suckthumb something or other. Poor guy was barely mentioned by President Trump, who came to Pennsylvania to huff and puff about how successful his Presidency has been and, oh yes, support Congressional Republicans. No final result yet. Lamb leads by a hair. We won’t know the results until tomorrow’s absentee ballots are counted. I think Lamb will win by a shake of his tail, maybe 350 votes out of over 200,000. Win or lose the Democrats will feel exultant and so will I. (Trump won here by 20% last November)

Oh, I almost forgot. Tomorrow’s paper will have a story about how the School Board can’t wait to spend 2 million to tear down New Central High. As of my bed time 101 folks on Facebook have heaped abuse on the Board. That’s what I predicted would happen a couple days ago to friends but – last November Duluth elected a board mostly eager to turn the old school to dust. The lone exception? Alanna Oswald.

The story from yesterday on raising class sizes won’t improve voters attitude and neither will future plans to ask for more $ in a referendum.