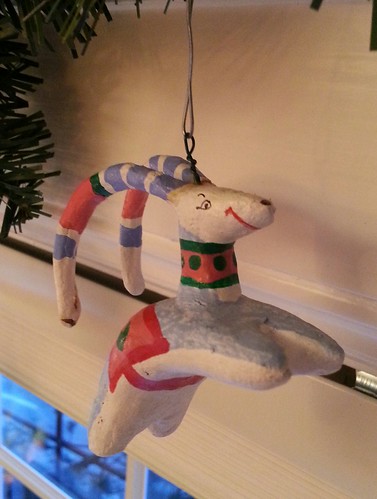 I’ll post one more image of my Mother’s Christmas Ornaments tomorrow and explain the significance to my family of the Twelve Days of Christmas. Its not a big deal but just an anecdote my family jokes about when we get together which sadly, as we’ve aged and feuded, has become less common.

Yesterday I brought my Mother home. Literally. In a box in a shopping bag. Her cremated remains weigh about five pounds. I hid her in my office closet and thankfully my grandchildren have not been here or they might go pre-Christmas snooping and get the wrong idea. I had thought my Mother’s remains would be shipped to the cemetery in Mankato where she will be interred near my father. Guess not. My Mother was widely read and, as an amateur student of people, I think she would be amused by the day I had.

Two days ago I was censured by the School Board. Officially it was because I stupidly disclosed the price of Central High on my blog. I voted for the censure myself and afterward Bill Westholm called me over to shake my hand and thank me for doing the right thing. Unofficially I was censured as a shot across my bow because my fellow school board members hate my blog. For some of them it was payback because I’ve written about things they’ve said and done which don’t match the sainthood which they and the rest of humanity aspires to.

At the outset of our meeting someone, I think it was Art Johnston, made a cutting remark about holding the meeting next door to Christmas. Taking umbrage at this my seat mate Rosie Loeffler-Kemp explained earnestly that because the Board members knew of my Mother’s death they wanted to postpone the censure vote during my period of grief. I thanked Rosie for her thoughtfulness. I’ve recorded the exchange on with the help of a friend who will help me put it on youtube. I’d like folks to know that I did not spend the entire hour plus scowling as ferociously as my picture on the front page of the Trib might have suggested although scowl I did.

So I woke up on the day before Christmas Eve with a banner headline about my censure as my kids came back to Duluth. Its nice working with folks who have an exquisite sense of timing.

If it is not already apparent some of the optimism I woke up with yesterday morning has begun to wear off. The Ghost of Christmas past is already fading before that of his successor. I got a call from Christmas future and was told I needed to pick up Mom now or sometime after the holidays so hustled over to collect her. I brought her in as my son’s girlfriend and her sister were baking Christmas cookies in the kitchen. I tucked Mom away in the closet and then noticed the approaching troop of cleaners who showed up and spread out busily to spiff up our house.

I retreated to the sun room where we keep the Christmas jigsaw puzzle and my Mom’s ornament arrangement and sat across from Claudia with a thousand yard start. I told her about Rosie’s and my fellow board members consideration and we had a chuckle. Then I told my wife that I thought I would remember this Christmas. Ah, You should have heard our peals of laughter. It was the sound of Christmas Cheer.