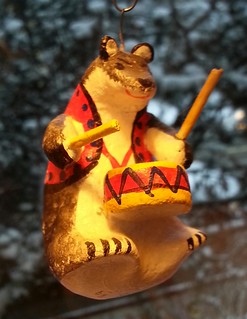 I’m the curator of my Mother’s Art and would some day like to print a little coffee table book of her work. I looked though my computer just now and discovered that this bear was made in 1982 as her second batch of Christmas ornaments. I took pictures of each year’s graduating class that I have samples of. She made them from 1981 through my Father’s death in 87 until 1994. In the early years she didn’t put the year of creation by her signature, “by George.” Somehow I deduced the year of manufacture eight years ago or so when she first was sent to live in a dementia wing of Walker Methodist in Minneapolis and I began my curating. I spent the year taking pictures of all her work and began collecting images of everything I could lay my hand on. New old stuff pops up every so often.

Recently I found one of her painting from around the 1970’s that was given back to my sister by the family of one of my Mother’s best friends. The friend had died and the family thought the painting should go back to us. My sister, in turn, gave it to my daughter as a wedding present last summer.