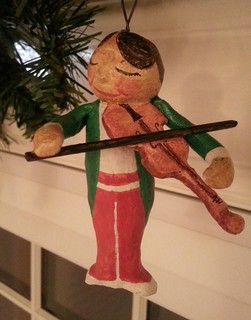 My sister Becky was part of a string quartet at Mankato West High School and Mr. Gerdejanson was her string teacher. I’m not one hundred percent sure this ornament was modeled on the teacher but I sort of think that was the case. By the time my Mother made this one she had been making Christmas tree ornaments for a decade. By 1989 my Mother had left Duluth and was no longer a regular part of Harpies Bazaar but she had a hard time giving up her popular ornaments. By this time they were getting far more elaborate.

In the early years she made simple figures and painted arms on them. Eventually the arms budded and like this musician took on such things as this violin.

Mom had been working with paper mache since I was a kid and may have learned the technique in her college Art classes. By the time I was little and my Dad was in law school she put her art to work as a window decorator at a local Topeka department store called Nightengales. We would take the bus downtown where she dropped me off at a daycare/nursery while she continued on to work a few blocks further.

I have an old yellow newspaper clipping from those years of large paper mache figurines Mom had made of singers for some Christmas event. I also recall that we had half a dozen hand sized doves that she must have made as center pieces for some table arrangement.

When I was in fifth grade I enjoyed some momentary celebrity in my class when Mom volunteered to help my class make paper mache puppets. It was probably a week long project and our teacher got her husband to make a puppet theater where we could hide ourselves while having our new puppets perform. That’s also my first recollection of making an audience laugh with an extemporaneous quips. I must have had a particularly clever puppet.