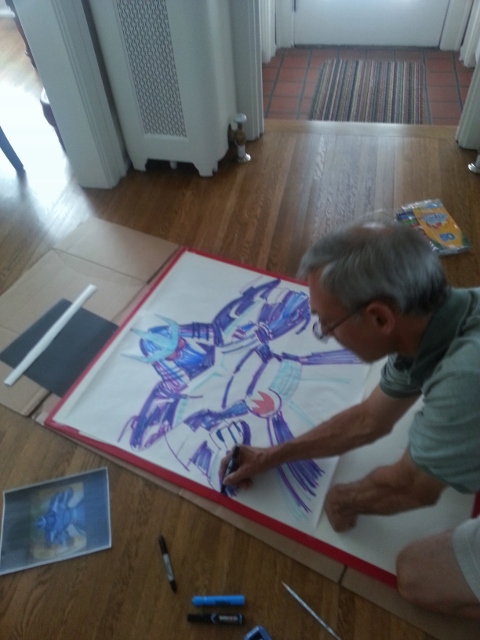 I was about to write that my final hoorah of the summer was my oldest grandson’s sixth birthday. No, it will be next Friday’s visit to the State Fair with our long time State Fair companions Frank and Jan. But that will require no preparation.

My daughter has been planning a birthday party for two weeks. It seems to be half birthday party half celebration of the completion of her new deck. She deserves it. Its the last big project on her house’s remarkable two year Odyssey through the world of repair, disaster and repair. I was asked a week ago to draw the evil Shredder from the Teenage Mutant Ninja Turtle franchise. Claudia snapped a pic of me yesterday bent over completing it. We put magnetized rubber underneath the image and Claudia and I made shurikens (throwing stars) out of the same magnetic rubber to throw at the target.

Twelve little whirling dervishes probably spent less time taking pot shots at the dude than I spent putting him together. Dervishes was the word. Claudia and I felt like Gordon after the The Battle of Khartoum. We were wiped out.

Monday is the Tan Man’s last day of freedom and we will be watching over him but after that my days will free to campaign. Door to door work would keep me fit. I might try it.