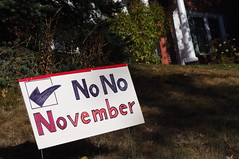 I just put up this sign this morning after my two Vote No signs for the marriage amendment disappeared.

Since I plan to vote against both amendments I really prefer this slogan.

I’ll vote against the Marriage amendment because I don’t object to same sex unions and this amendment would put Minnesota’s current statutory prohibition into the State Constitution. There are two reasons this is on the ballot. 1. Its hoped by the GOP that it will bring out Republican leaning voters. A shrewd tactic. 2. Its also hoped by opponents of gay marriage to defer same sex unions in Minnesota for up to a decade. The concern is that if this in not incorporated into the state constitution then the legislature could OK gay marriage by a simple majority vote. Putting it in the Constitution will require another statewide vote to take it back out again and that will be harder than a simple majority vote of legislators. I figure this would delay same sex marriage by 5 to 10 years until a few more people change their mind and a few more older, resistant, voters die off. Even if it passes, maybe especially if it passes I expect civil unions, just short of marriage, will be authorized in the next couple of years.

I’ll vote against the Voter ID amendment because I think it is a crude answer to a mostly nonexistent problem of fraudulent votes – in order to keep Democrats from the voting booth.

A few weeks ago I posted Mary Kiffmeyer’s video justification for the amendment. In it she concludes by saying that in a recent election there were about 5,000 voters who the Secretary of State could not verify as living at the locations they were allowed to vote in. I mentioned this to my wife and she asked how many of the 5,000 were college students who moved after a school year and that the Secretary of State failed to track down. Probably a lot of them.

Since there is no compelling evidence of massive voter fraud brought about by any political party I’d say the several hundred or even several thousand suspect votes probably are small price to pay to get a large voter turnout.

I appreciate the concern about those who are prohibited from voting going to the ballot box anyway. I’m just more concerned about putting huge obstacles in the way of legitimate voters.

The Republicans who are the primary authors across the nation for these laws have gotten the idea of voter suppression from past experts the former white democrats of the south. They had better than a hundred years to find ways to deny black citizens the right to vote. Minnesota’s plan is less egregiously unfair than some of the other voter ID laws being proposed in other states but it still has a stink about it. Because the objection to felonious voting won’t go away I think it would be in the Democrats own interest to devise a less onerous voter ID procedures rather than let them be drawn up by Republicans.

Republicans have made a very simple calculation. If the voting population that stays away from the polls is poorer and weighted more heavily Democrat then Republicans will benefit. If 60% or 70% of the people staying away from the polls because of burdensome ID registration are Democrats it will be a net gain for the GOP. Out of a 100,000 voters the GOP might lose 30,000 or 40,000 votes but Democrats would lose 60,000 or 70,000 votes. That’s no small potatoes especially in a close race.

Until such time as a fairer ID procedure is drawn up I’ll vote against this amendment too.