I spent the morning uploading photos to the flickr site so I could post more pictures ofÂ our trip to Denmark. Here with a little commentary are a few more. 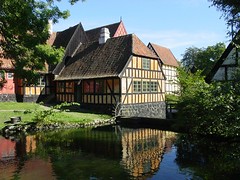 In Aarhus we visited Denmark’s version of Williamsburg. The old village (which is a rough translation of its name) was a cluster of several dozen old houses brought to the site from all over Denmark. Actors play the rolls of Danish people from the past. It was a gorgeous day as this photo illustrates. 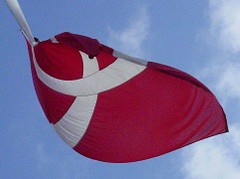 Just before we got to den Gamle By we had to take a train and then aÂ bus to the car rental office out by the air port. The train took us to Kolind where weÂ caught theÂ bus. While in Kolind we found a bakery and ordered some real Danish. As we sat outside munching on them a man hoisted the Danish flag over us as we ate breakfast.

TheÂ following day after we reached Aarhus by ferry we discovered that the city as celebrating an annual music festival devoted to women. Their posters called it “Womania.” I noted that it was a rather “broad” subjectÂ and thisÂ led Claudia toÂ whackÂ me. While we wandered the streets we found yet another symbol flying overhead. Womania indeed! 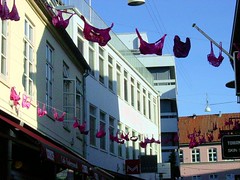