I think it was yesterday that I got Howie Hanson’s email blogÂ and was surprised to see Senator Yvonne Prettner Solon accused of voting against the DECC expansion because she had voted for the DFL bonding bill which did not include it. I was going to comment on it here and suggest that she really had to vote for bill and then fight to have the DECC added later. Apparently someone else, Perhaps, Yvonne, pointed this out to Howie. When I went back to check the blog archive all reference to Prettner-Solon’s vote had vanished.

One convenient thing about blogs is that they can be instantly changed. I make changes all the time when I discover some darned typo or realize that my facts are wrong. Unless someone comes in andÂ copies myÂ mistakes to a cache file somewhere I can remove my mistakes at will. ItsÂ a little like airbrushing out a pimple.

I still recall the famous pictures of Stalin’sÂ cronies in the before and after the purge photos. 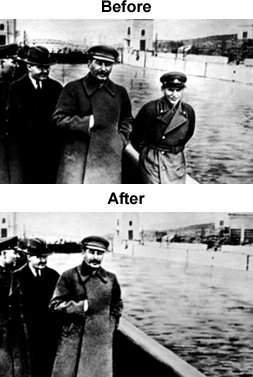