My pesky buddy asks me why I shouldn’t be whining about the Democrats being responsible for the fiscal cliff we seem to be lurching over. Fair enough. I guess the first place to start is the old saw that it takes two ____ to have a fight. This implies that both sides must be guilty. Equally guilty no doubt. I suppose all those dead kids in Norway who’s rotten Labor Party parents let the damn Moslems into the nation are half to blame for getting shot up as the guy who took his guns and mowed them down. Right?

Yeah, Democrats did terrible things like creating Social Security that was a dead end when the population stopped growing. And medicare too.

But the simple fact is that both of these massive entitlements are manageable. You raise retirement ages, limit payments, take the rich off the benefits in the case of SS or in the case of medicare you impose some rationing or, again, raise taxes. It once was that Republicans were resigned to these benefits and attempted to impose some order on them so that the nation wouldn’t burn itself to a crisp giving out unsustainable goodies. These Republicans would come to be called RINOS by the Ayn Rand crowd and Dixiecrat crowd and were kicked out of the Party for their moderation. My God who could blame the purists. Some of these RINO’s didn’t even believe a newly fertilized human egg had constitutional rights!!!!!!

I’m not the only person to have a political party stolen out from under me. Abe Lincoln was a Whig. He believed in all sorts of Federal intervention to grow the nation that today’s Republicans would consider meddling in the nation’s economy. The scary new political party that rose like a phoenix in place of the Whigs was attracting extremist abolitionists, Immigrant fearing No Nothings and all manner of disaffected folks like Honest Abe. Funny how today’s Republicans seem all but to have forgotten him.

He’s not alone. Eisenhower, Teddy Roosevelt and Ronald Reagan (or at least his policies) would all be drummed out of Rupert I-wanna-tap-your-cellphone Murdoch Empire loving crowd of Republicans. You won’t find them listening to reports of Murdoch’s bashing on Fox News, Wall Street News, NY Post because the Murdoch clan owns them all.

I’ve attended a few Democratic Precinct caucuses in recent years because I appreciate that a political affiliation enhances one’s voice. My buddy prides himself on seeing the evils in both political parties so, I guess, that makes him more honorable than the rest of us. Nevertheless his ire seems disproportionately aimed at the bad old Democrats.

The problem with all the Independent Parties is that, like my buddy, they don’t want to get their hands dirty and they don’t want to alienate anyone. They fold after a few years having given their adherents little to hang on to except clean hands.

The GOP became a party of special interests as they railed against Democrats for being the same. In my experience I found it much easier to be an independent thinker as a democrat than as a Republican. Still, I liked the old GOP back before the RINOs were all kicked out. In fact, before there were RINO’s liberal Republicans were called “Gypsy Moths” and I was once one of them. I suppose back in the John Birch era we liberals were all communist dupes too. Ike was! At least we had Wall Street on our side back then too largely because of its aversion to regulation. Now Wall Street is getting to ride that aversion all the way into a financial panic. If I wasn’t a little invested in Wall Street myself I’d almost say a panic was justly deserved.

I was putzing around over the weekend. I’m tired of the Donkey and the Elephant. I still haven’t thought of a good set of matching words to go with the acronym RINO but I think I prefer this animal: 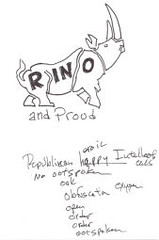 If anyone can think of some good words to match the accronym please send them to me. I think you should feel free to try out RHINO as well. I tried putting Republican in the acronym but the more I think about it the less necessary that seems to be. Republicans don’t seem to like them much.