As of this morning I’m still covid positive and my ailing better half finally shows a positive result too. My suffering was brief but my confinement has not put much of a dent in me. I did have a brief coughing fit but after a cough drop I’m fine and I an clear headed enough to be thoroughly enjoying, marveling even, at the book in the picture below that I’ve posted about before and will again. 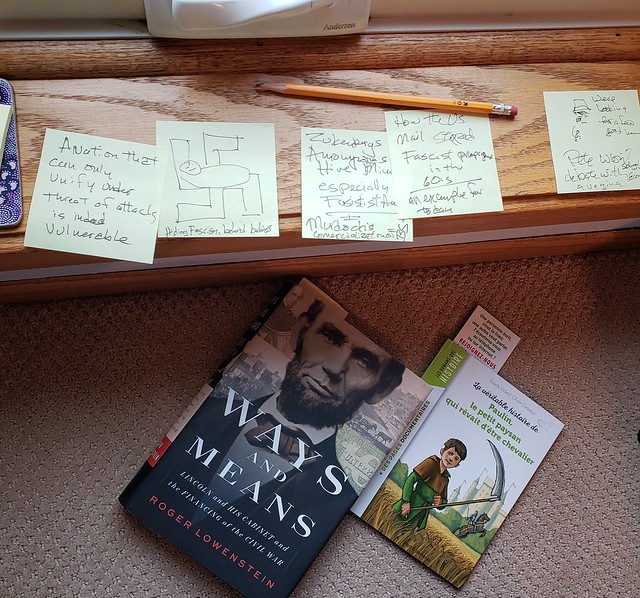 Covid will keep me confined until I run to negative tests over two days. So I’m still in an enforced quarantine. It postpones my chasing after Pete Stauber for a little longer but the books I’ve read recently after a very long vacation from serious history has wetted my appetite to combat stupidity. That will be clear in my next column Bird brains……. and its in evidence in the yellow post-it notes you can see on the window sill above the books. Note the simple image of a babe in front of the Swastika. I find lots of save the fetus stuff on “patriotic” sites which have crap like this on it:

Facebook is one of several places where anonymous saboteurs of Democracy are posting threats like this which hide among posts begging to protect the unborn. Talk about an unholy alliance.

I have been thinking long and hard about the Internets anonymity and how we have free speech but not free anonymous speech…..

Somehow we need to make authors of threats own up to their authorship to save our nation. That’s what the book on Civil War finances describes…..how the North built a nation that blasted past the vile South’s slaveocracy to form a more perfect government of function finance and bureaucracy. The Republican Party crawled into its own butt hole and has come out traitor to Lincoln with people doing their damned to imitate teenage ISIS nuts who want a southern caliphate. But the South was stupid, greedy and unprepared and it betrayed all the ordinary white non slaveholders with its dim witted financing…….Back then they had a lot of Rush Limbaughs pushing that stupidity until the white South was starving. That’s just what America needs today.