The little spider I mentioned who moved a yard away when a much bigger spider took over his/her web has moved back to his original web today. Yesterday I saw the bigger one exploring the other side of the door jamb before disappearing. My bathroom is close to a “food desert.” I think the poor mostly small spiders I see have to rely on eating each other. O

a yard away was a flat wall not a corner where bugs might follow the wall to a corner so the little spider found a corner behind the toilet. But as before a larger spider, a longer legged cellar spider crawled on to the web. Once again the little one had to stay quiet to avoid notice. This morning I saw the little one back in his first corner. As for the corner web he left I saw two cellar spider on it and one of them was sucking out a black spider suspiciously similar to the one that first chased off the little one. Its almost as engrossing as Nature on PBS.

Here is the fuzzy picture I took of one of the cellar spiders taking nourishment.

In one of the nature programs a year ago the pelican spider of Madagascar was high lighted. It has praying mantis like front appendages it uses to snare other spiders on their webs to hold them far enough so that can’t bite back as they are consumed. They are spider eating specialists. 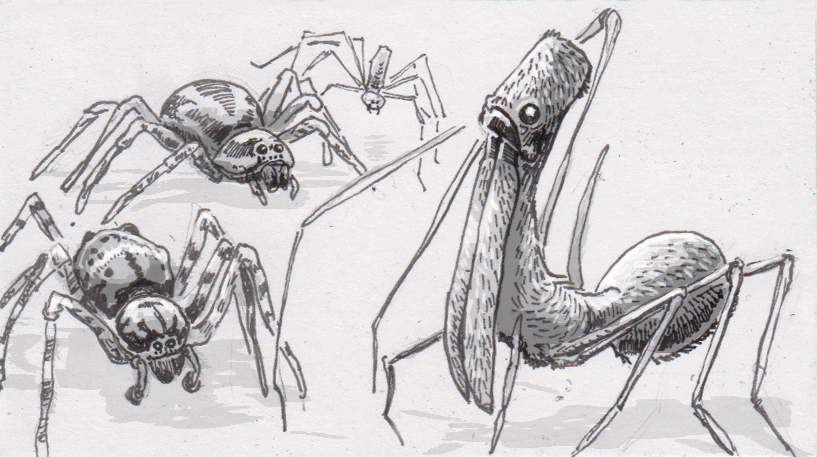