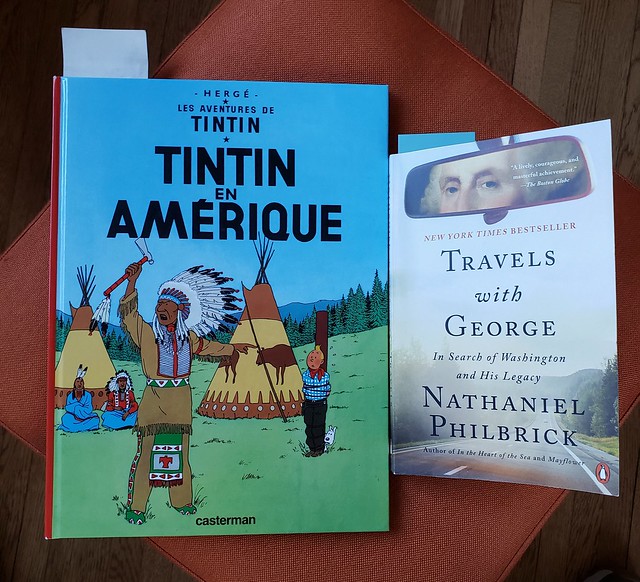 I haven’t started reading a good history book for too long. I’ve bought several in recent years but been so consumed studying French and doom-scrolling news on my cell phone that books seemed like a luxury. Here are two books I’m currently digging into.

The first is one of a series of popular French cartoons of Tin Tin the intrepid boy detective. My French pen pal sent it to me as a thank you for sending her the kid’s book I wrote and published to finance a 1992 Campaign for Congress. I’ve discovered a good cell phone ap for taking pictures of the text and instantly translating it so I can see my mistakes. I’m about half way through with it. Tin Tin is visiting Chicago to expose Al Capone and somehow he ended up in the Blackfeet territory or Pieds noir. Feet black.

It doesn’t pass any tests of political correctness but it was drawn and written in about 1946 at the end of the Second World War before being PC was a thing.

This morning after I spent a few minutes with a designer working on an alteration to my lawnsigns to help me rid northern Minnesota of a man who hides behind lies I took my pen pal on a cell phone tour of Canal Park for a couple hours. At first I couldn’t Voip call so I sent her pictures with explanations: Here is a screen capture:

My contributions are in the blue bubbles.

I walked across the lift bridge and snapped stills of the Cruise ship and a Vista ship going under the lift bridge. Then I realized I could make that VOIP call and we chatted for another hour while walked along the canal into the Canal Park Museum and elsewhere. My French is coming along.

When I returned home I began reading the other book in the picture above “Travels with George.” I saw it and snapped it up at Barnes and Noble’s a couple days ago to which Claudia commented it was an other book for to gather dust with. It was unkind but its the sort of comment that drives me to start the books. I like Philbrick’s work. I bought a book of his fifteen years ago Sea of Glory. My bookmark is still in that book on page 176 where I left it for the time I would return to it. I made it almost halfway through his history of the young America’s voyage of Scientific Discovery in the Pacific charting the continent of Antarctica. He wrote another book a few years back I read a great review of about the Whaling ship Essex which was sunk by an angry wale…..shades of Moby Dick

Recently he began a series on George Washington of three books in all and this I think was a forth. I knew that the state of America was such that it was worth reading. I’ve written often about how Lincoln sewed America back up…..I do it to remind my readers that we are letting the founders of our nation down these days. I’ve long been able to see Lincoln as a recognizable flesh and blood American. Washington on the other hand has been more remote with his face turned to stone in an effort to conceal his terrible dentures.

This book is an homage to Washington that makes him human. It is about how when he hoped to be in retirement he was thrust into the first presidency and purposely took a long tour of his new far flung nation. The Title is an homage to the Author John Steinbeck’s travelogue which took him through America with his dog Charley. I bought the book a few years ago to read to Claudia on one of our vacations. I never really got into it. However I recognized in Philbrick’s book that he was traveling with his dog who was, however, not names George.

He had just finished a trilogy on Washington and got interested in the newly elected President’s travels through this new America he helped to create. Philbrick the author was, like many of us, agonizing over the many issues which are dividing us today. He knew that Washington’s America was similarly riven and yet the new President did his best to keep our new nation together although at the cost of his popularity. By the end of his second term he was being treated roughly by the Facebook denizens of his era.

I just came in from reading the first three chapters. I ought to offer to read it to Claudia but she is out for the week – which explains why I felt free to give my pen pal a tour of Duluth.

I so liked one passage early on that I read it and am about to post it to my Podcasts. Its a six minute listen.