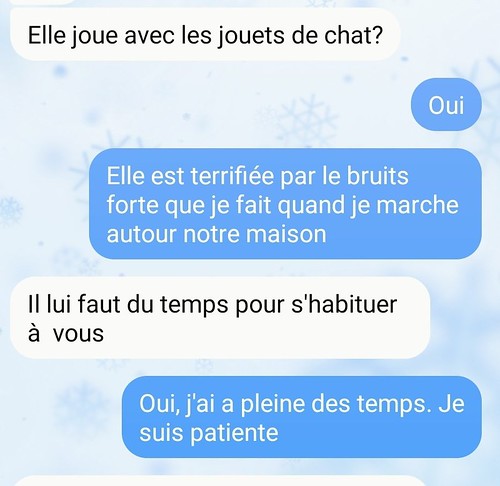 I set out almost five years ago to learn French. At my last birthday I thought I’d be able to speak with relative ease by my next birthday in December. I’m getting closer but it will be several years before I can speak with fluency. But I include a sample from this morning of my near daily chats with my French pen pal. I sent her a picture of our new cat Orca and explained that our new resident was fearful of the loud stomping I make as I charage upstairs and down on my many political errands of the day.

I often check myself by putting my sentences in a translator. These were near perfect. Speaking does not afford you the chance to stop and think through your vocabulary although its upside is that you don’t have to worry about spelling.

I am a stubborn man as my many losing campaigns for public office demostrate. But I am as the previous post indicates true to myself……and would be true to my campaign promises and pledges. I would not surrender my honesty simply for the sake of winning an election. As you have discovered if you read my blog I speak two forms of French. The first is the national language of French. The second is the euphemism Americans use to cover their rougher vocabulary, swearing and such. Its the sort of thing American soldiers say when under fire. Today the fake Republican party of Pete Stauber has all of our Democracy under fire.

I decided a week ago that if Pete wins I will file against him again next election unless he confesses publicly that he was wrong to hide behind Donald Trump’s attempt to cancel four state’s legitimate election results to overturn our Constitution. If he does confess I won’t run against him. I don’t think he has the courage of honesty. In that case I’ll begin planning that fourth campaign starting August 9th. That is unless I beat Pete in the Primary. Should I lose I will bust a gut to elect the Democratic victor in the Augusit 9th primary. I prefer like Democrats and certainly prefer them to traitors.