A fellow who got my letter from the first mailing began trying to reach me by phone yesterday. We played telephone tag through the day. It wasn’t until I got home today from putting up a dozen lawnsigns on some of Duluth’s most traveled roads that my family helped me figure out why my cell phone wasn’t sounding when I got calls. I’ve missed calls because of that for several months now. The caller had met me fifteen years ago and my letter intrigued him. He told me the unsurprising news that a lot of people think I’m a little wacky. That came as no surprise to me. He also said he knew I was a good writer when I pointed to my columns. I mentioned the comedian turned president of the Ukraine and Abraham Lincoln’s joke telling during the trauma of our nation’s civil war.

He hadn’t quite divined from my letter that I wasn’t running against the Democrat as I was running against Pete Stauber. As he said he was contemplating a significant donation to my campaign I understood I needed to give his call the hour it took. That happened during the quadruple solitaire game Claudia and I had started with our grandsons. Its our Wacky (to use that word again) Wednesday. We have had our grandsons over most Wednesdays for the past decade. Sometimes politics interferes with family.

Today began yesterday with the good news from Monday that my lawnsigns would be ready at 1 on Tuesday. I went down to pick them up after stopping at the post office in hopes that the first returned donation letters would be filling my PO Box. They weren’t. They weren’t there today. I think its because Duluth mail is routed to the Twin Cities now and then sent back to Duluth. If there is nothing in the PO Pox tomorrow I will need a sugar daddy to help me put my damning letter in all 200,000 registered 8th District voters mailboxes.

If I can do that I really do think Pete’s chances of winning the August 9th primary go from 99% to 60%.

And I’m not finished campaigning yet. This weekend I am trying to get my lawnsigns up where 100,000 Grandma’s Marathon visitors can marvel at them. With some luck they might take word of my eccentric campaign (I like Democrats) out to the larger world. I’ve already sent my letters to the ten Republicans who voted to impeach Trump and the 200 plus Democratic Congressmen who are watching the brilliant case they have put together against Trump that no Trump cultist will be watching.

I hope they realize how damning my “SO HELP ME GOD!” page is. It should be sent to every voter who has a Pete Stauber denialist running for reelection. I really don’t want to serve in a Republican Congress led by Trump apologists.

So my day began with my cat unable to stand. Moloch has been bed bound for a week. I had been carrying him to the basement to visit the litter box. Today he became incontinent the condition, due probably to kidney failure, of his predecessor O’Shea. The vet told me he was 16.5 years old. I mentioned too few times in the blog but he often appeared in my Facebook page. Here’s an early mention of him.

My younger grandson came over to pet him one last time before I took him away. Many tears where shed. Everybody loved Moley.

I had work to do. I spent the morning putting lawnsigns together for a quick putting up. I have 250 signs but each one has to have four holes punched into it and four zip ties inserted. and I also had this brainchild: 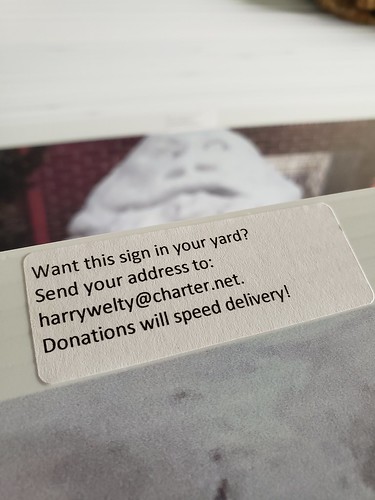 Each sign with the rebar costs about $15.00. I think my signs might become fun things for people to put in their yards. If they paid me for them I could replace them. The Eighth District is vast. Its one third of the state, maybe a little over.

After lunch I began putting up signs. Almost twenty. Not bad for just 3 and a half hours. Tomorrow and Friday I’ll have two full days to put them up.

This took 25 minutes to type and I’m exhausted. I was lucky to get 7 and a half solid hours of sleep the night before. I might get such a night’s rest again considering how spent I am.

My potential money man asked me who was helping me. I told him I was my own campaign manager. I admitted it was times like this that a political party came in handy. I added that after 20 campaigns I was incredibly versatile and effective but this is a Congressional race not a school board race. Big difference.

But now I’m running on. Good night all.