Starting no sooner than May 13th and running no later than May 31st I need well over 1,000 signatures on the petition below to become a challenger to Congressman Pete Stauber.

If you send me an email I will deliver a petition to you. My email is: harrywelty@charter.net

Each sheet has a place for ten names and signatures. I need a minimum of 120 forms ready to take to Minnesota’s Secretary of State by May 30th. The signers must be Minnesota residents eligible to vote in the August 9th primary. They are not required to vote for me or in any particular political party’s primary although, of course, I hope they vote in the Republican primary for Harry Welty instead of Donald Trump’s clone. They are just giving Harry Welty a hand to become an official candidate. That’s all this petition does.

NOTE 1: If I fail to collect 1,000 signatures in time I can drive down to St. Paul and spend $300 to have my name added to the ballot. However, as I type this my campaign account has just over $1000. That’s a hair short of Pete Stauber’s one million dark money campaign account. I’d prefer to save my money for other purposes.

NOTE 2: Twice before I have petitioned to get on the ballot each time getting about 1,200 signatures. I did this in both 1992 and 2006. I got these signatures single-handedly. But it was a lot of work and I’m older now. Besides. Getting volunteers to help me will both spread the message and assure me that there voters who are not content with a Donald Trump clone as their Congressional representative.

Who is an eligible voter in the 8th District? Here’s a small map. It includes Bemidji, Brainerd in the West, Lake of the woods and Grand Marais in the North and follows the Superior shore to Duluth down the I-35 corridor to the Nothern Suburbs and includes Lake Milacs.

Here’s a link to a bigger map: 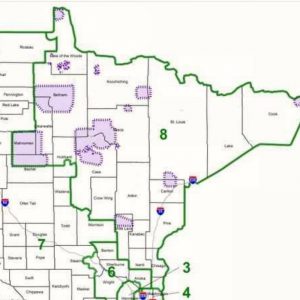 No gift to cleanse the stain of Trump from America is too small.