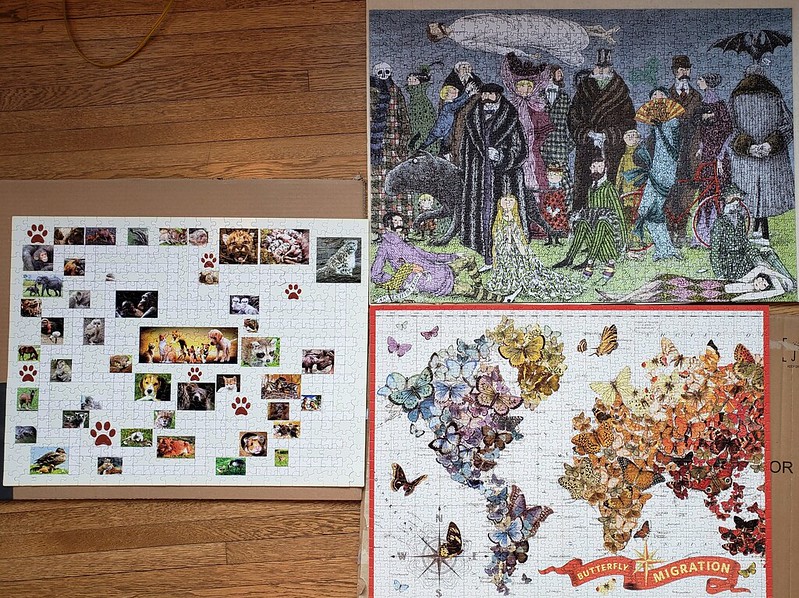 We got our Christmas jigsaw puzzles out early this year before Thanksgiving. These three have just been put back in their boxes.

This cartoon likeness illustrates my early infatuation with political cartoons. In college I ran for the vice presidency of the student senate and I asked my fellow student, Duke Durfee, to draw my caricature. It was on my campaign signs. I lost but the now a Broadway scenery designer gave me a satisfying likeness. I spent several months preparing for this year going through my old files. This will help me with some books I want to write. I found Duke’s work and taped it near my computer for inspiration.

This is one of the last Xmas display bins I put away yesterday. It covers a manger scene my mother-in-law gave us shortly before her untimely death in a small plane accident. lying on the top is a piece of cotton cloth that was brought to Mankato, Minnesota by our foreign exchange student. It was part of a national costume from Ethiopia that he was given to show Americans native costumes. He didn’t know how to put it on quickly because it was the Christian nations costume and Bedru was a Muslim from the Eritrean province handed over to Ethiopia by the United Nations after WW 2. Somehow this remnant stayed with me and I place it under my mother-in-law’s work each Christmas. When I visited Israel five years ago I was struck by how many former Ethiopian jews I saw wearing the same cloth. I heard that many have become Christians while they were brought to Israel as jews a few decades ago when their formerly Jewish populations were under threat.

With Christmas over I got to clean my office again yesterday. Lying here are some items I use regularly including earphones I use in the middle of the night when I can’t sleep and practice French until with luck I get drowsy again. Along side it is a child’s French bible I bought at the Basilica in Marseille to read simple French and a legal pad with notes about all the things I want to get done today as I retreat from holiday mode. 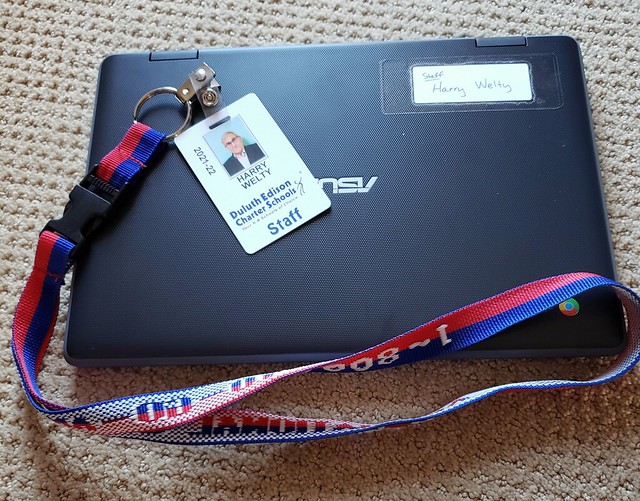 This is my name tag and chrome book from Northstar Academy. I began substitute teaching at the beginning of December. I know that covid is making it hard to find subs in all our nation’s schools. Its a little like finding enough hospital staff in ICU’s. I had planned to teach in all the area schools but because I have a grandson in each of the Charter schools and because I like being near them this is where I will teach unless I burn out. I have had them both in classes and avoiding their embarrassment is my principal concern. I’m not too worried about it. Evidently a bunch of the girls in one of my grandson’s choir class want me to be the teacher if their director ever calls in sick. That would be fun. When I was a regular sub in the 1980’s one of the best days was as the faux band director in West Junior High, now long gone. As the band struck up a tune I waved my arms in time with the music. No sweat.

I will add that eighth graders are still epic challenges. So far I’m holding my own but my every Tuesday, Wednesday schedule is a grind. Eight hour days are very long and my French pen-pal is a little appalled at the length of our school days. She taught in an Ecole herself and she is almost as shocked that anyone my age would return to the classroom. France retires teachers early and their public schools are all run by the national government. Before my son left from his Christmas break he asked me how my day had been. As I lay almost horizontal on the living room sofa I told him I was “still standing?” He replied, “It doesn’t look like it to me.”