For most of my blog’s history I have blogged up a storm. It started with posts in 2006 that can be accessed easily by month and year in the menu along the right side. You will find them by date below the general subject categories I assign posts. Truth to tell, I was so intent on filling the blog up that it was often difficult to have the concentration left for other projects like writing books or learning French. So, for the Covid years my blogging has been sporadic and mostly limited to linking to the columns I still write for the Duluth Reader. All through these two years I daily tag new stories I’d love to chat about on the coming disasters, existing disasters and other such trivia. I rarely find the time to post them and comment.

But refraining from blogging has paid dividends. I am well on the way to comprehending French and I spent the better part of last year pounding out material for books that didn’t quite coalesce. What has eluded me so far was a thorough organization of my attic office in order to find material I know is there and that I want to write about but can’t easily find. Over the past five years everything has come together under one unruly but is still fifty years of higaldy-pigaldy. I’ve worked on it over time. For instance, I have a three-foot-wide wall of documents in three-ring-binders on my war hero Grandfather George Robb. It is chronologically organized but it is only one quarter of the material I have about the rest of my family. Three weeks ago I began working on everyone else. In many ways what I have done is a preliminary organization. Reading all the papers I’ve organized has not been possible but I’ve paused to make many illuminating discoveries that give me better context about the people who helped make me.

And there are more rewards. Today I just cranked out two weeks of Reader Column rough drafts. That puts me ahead of the game. And I began a possible book this morning too after waking up thinking about the play my daughter helped put on at Denfeld last night. An initial list of chapters reprises many of the subjects I typed out over the last year for other books but with a slightly different angle. Its related to the asinine fear mongering of Missouri’s Senator Josh Hawley who says that liberals like me are trying to neuter American boys. No, he wants more seventeen-year-olds toting AR 15’s where they do not live to keep White America safe. Josh should stop advocating pre frontal lobotomies for his supporters.

By the way, here’s the sign my Brother and sister-in-law put up a couple months ago when we visited St. Louis. 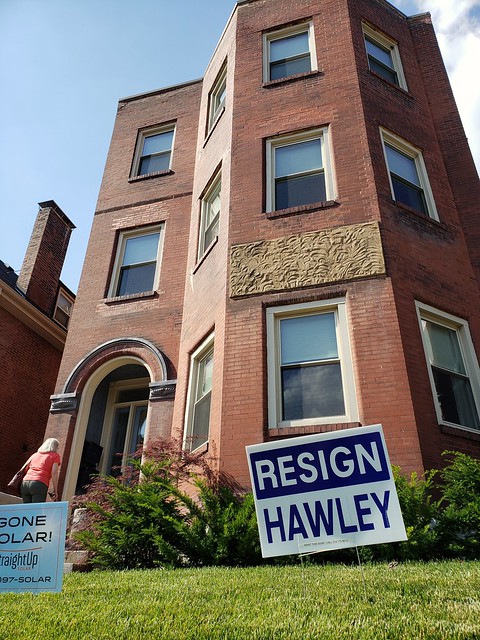 So, my blog will remain quiet until I figure out how to do a million things at the same time more efficiently starting with Substitute teaching. I might be in classes as early as next week. My W-2 forms are all filled out.