When one in five Duluth teachers writes and tells me to pay attention, I pay attention. I wrote personal letters to the first thirty teachers who wrote to me about the frustrating pace of our contract negotiations but the recent tidal wave of postcards is simply beyond my ability to respond individually. I apologize for this form letter but as most of the comments directed at me seem to come from things I’ve read in the “Goldenrod” I think this one letter can address most of them.

From the form letter I wrote to 156 ISD 709 Duluth teachers as they were urged to consider a strike against the Duluth Schools and me, a school board member. You can read it all here.

prologue: I’ve kept tons of writing that would take me years to reread. As I have been writing a series of columns about my early teaching history I got caught up in the original Edison debate, and my resignation from the school board. I have been rereading this material and I’ve come to a new appreciation for ME. The letter above is so fair minded and so true it had to help put the brakes on Frank Wanner’s desire to strike against ISD 709 in 1998. And yet I’m remembered for resigning with a voodoo doll. The principal dates are as follows.

As all this hell was breaking lose I was in high spirits. I was pissing everybody off but I look back on it all and can’t help but agree with my thought at the time that I was absolutely brilliant right up to and past my falling on my own voodoo doll.

Here is short timeline.
DNT headline April 19 Teacher Strike would touch all
…………. April 20 After sending Union President Frank Wanner a critical letter I mail the letter above to 156 teachers
DNT editorial April 21 “Welty Should leave leadership”
DNT headline April 22 “Welty Resigns from School Board’s Top Post”
The next day I got a huge charge when I went into The School Superintendent’s office and learned that the nationally syndicated News Broadcaster Paul Harvey had mistakenly said I’d put a voodoo curse on all our teachers.I had used a voodoo doll prop but I’d put a curse on “ill will” in the District. I was almost disappointed to hear that the Superintendent had called Harvey’s offices to say they were wrong especially when that afternoon they omitted the now corrected story so I couldn’t hear it. I did get a copy of the broadcast from a KDAL radio and even put it on my snowbizz website.

The point of all this is that I was in a very good mood……I think the way I’d put it today is that I was doing “Good Trouble.” I was upsetting apple carts but I wasn’t upsetting the money lender’s tables in the Temple.

Here is an email I sent a friend a couple days before. I swear her to secrecy to save my son from embarassment. Its been twenty years now. I think he could take this little revelation. Enjoy. 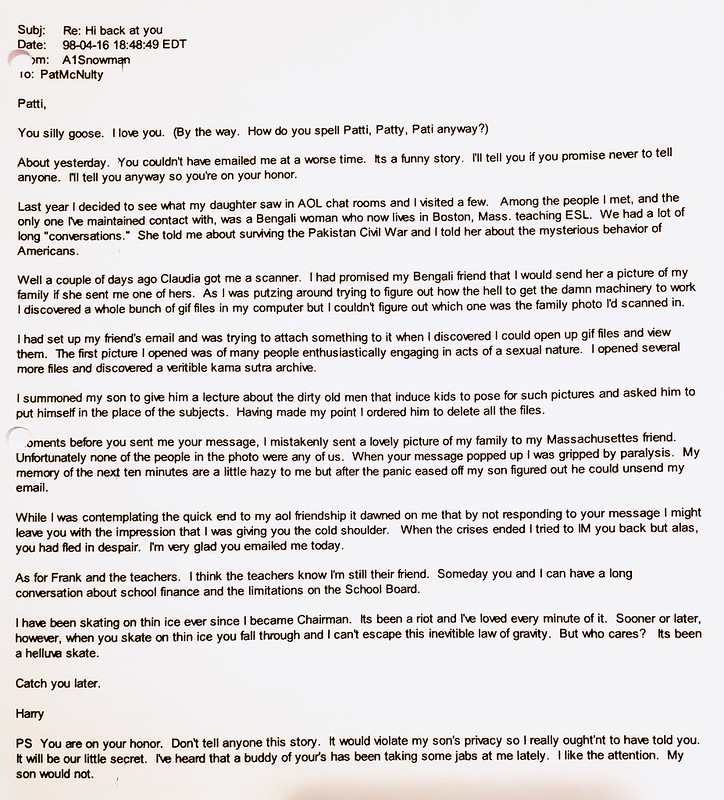