It has always been a mystery to me who reads my blog. From the beginning one metric that my stats show me is which countries peruse my blog the most each month. I have always figured perusals, the vast majority of which only last seconds, represent bots checking my pages and not real eyes. The metric I find most interesting is the number of views each month that lasted over thirty minutes or over an hour. With my old estimate of ten million words logged there is no dearth of stuff to read. So far this September its over 1200 such views. I presume my latest posts are the ones that people who linger spend their time reading but even my longest posts rarely take more than ten or fifteen minutes to read. What are they looking at?

I suspended my obsessive blogging when I finished running against Pete Stauber last year. I should put quotes around “running” because the last two times I ran against Pete, I really only filed to be a candidate. In the grip of covid I stopped most of my blogging and began spending a lot more time chatting in French and English with a pen pall who shall remain nameless. Almost four years after starting Duolingo and seventeen months with a daily French pen pal I find myself fluent in mauvais (bad) French. In 9 days I will fly to France and inflict my poor French on unsuspecting citoyens de France.

On a post-it note above my computer are my three goals for 2021, 1st. Defend Democracy, 2nd. Write two books, 3rd. Learn French. Loving my family supersedes all of these but I am try to act as though this goes without saying.

Upon my return from France I will stick with Duolingo and my pen pal and even try to put my nose into some French Books BUT I have some other plans. My books are not written and Democracy still needs defending. If you haven’t read them my recent posts have had some strong hints about where I’m headed.

I am stockpiling columns for the Duluth Reader so that they continue weekly while I am gone for a month. I have at least six roughly outlined. I don’t want to think about domestic politics or at least to write about it while away. I might send frequent notes about my travels along with favorite pictures of what I am experiencing. I did that when I began my blog in 2006 when we traveled for two weeks to Denmark. At the moment I am about where I was in my 631st post of Lincolndemocrat. You can peruse all of September’s worth of posts of our trip beginning with our cat O’Shea’s urinary infection in the September 2006 category here. The end of O’Shea starts it. That is dealt with in post 652 By the way the links to ancient videos don’t connect to anything. 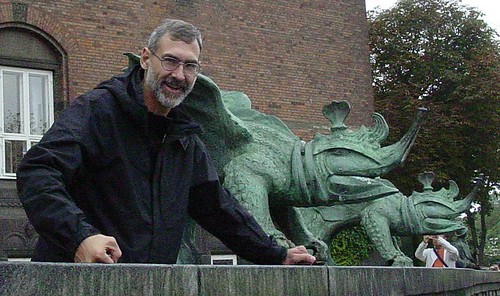 If you go there and page ahead you will see some of the smaller pictures I took then which I kept small so as not to be stuck in a never-ending download. Bits fly through the Internet much faster today.

I don’t want to lose the audience that has recently found me again. Those hour long visits have more than doubled in the past couple weeks as I’ve been blogging a little more regularly. I’d like to keep them and I hope my masked adventure to France keeps people coming back.