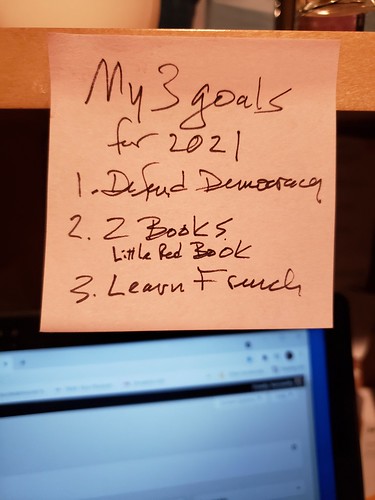 There is one unstated goal in this list. Take care of my family or at least don’t let my manias interfere with my family:

The number two keeps changing…….”2 Books Little REd Book” That was a couple months ago when I put this pos-it note above my computer. The part about writing is currently manifesting itself as a series of columns I’m writing for the Reader on my experiences in education.

1 and 2 are wrapped up together. There is another post-it note beside this one that I just put up moments ago. I’ll take it down after I finish this post. This post will be an iteration of my plans. a short list.

As for #3. Well, I have some unformed thoughts on how learning and using French might help me address #’s 1 and 2 beyond the borders of the US.

So what does the new temporary post-it say?

I also have “Jesus” looming above both of these in a box.

So what does this mean? It all addresses a thought I had as I lay unsleeping in bed. Anger is not the solution to our most serious problem of the near end of the world as we know and love it. Or to put it another way -uncontrolled anger isn’t the solution. That’s where the two arrows comes in.

In the story of William Tell, whose familiar opera melody rings on as an earworm in the ears of older Americans, (it was the theme song for the Lone Ranger) Mr. Tell was ordered to place an apple on his son’s head by his dictator. He was told to use his renowned marksmanship to shoot an arrow through the apple. He was given no choice and the sadist would have killed them both had he refused. Tell took out two arrows before aiming at the apple on his son’s head. The first arrow found its mark. The sadist asked Tell afterward why he had taken out two arrows. “The second was for you if I missed”, Tell calmly explained.

My second arrow is for today’s Republican Party. I hope not to have to use it but, as the preceding news story makes clear, Sadists are running the party of Trump and they want names to know where to place apples.

I am planning on running for Congress in 2022. I may not do it but if I do it will be as a Republican. There is no way I would harm the candidacy of the party that is conducting the investigation of the traitors who invaded our Democracy’s inner sanctum on January 6th.

Writing and publishing a book or two is part of my plan if it proceeds.

I will not let my #3 goal of learning French by this Fall be pushed aside. Nor will I let the overarching but unlisted goal of supporting my family be tampered with much. I just sent a text at 4 this morning to my son-in-law to tell him I would be available to help him cut down and haul off some trees in his back yard.

So what about the rest of the note; the part about Lincoln neutering Jefferson’s traitorous heart.

Well that was the result of the Civil War which Lincoln had no desire to start but would not let go of until he defeated the slave holders. That’s where Jefferson’s traitorous heart is.

When TJ penned the Declaration of Independence he was all of thirty, roughly the age of Jesus at the beginning of his ministry. But from the beginning Thomas Jefferson was never able to reconcile his lofty Enlightenment Age sentiments that all men are created equal with his pecuniary interest in holding a hundred slaves in bondage.

We could rightly call this hypocrisy but in many ways it is far worse. Think of how the slaves got to his plantation on ships the crews of which threw their wretched dead into the Atlantic as shark chow. Floyd George is just our most recent Era’s shark chow. The treachery rose again from defeat in the Civil War to become newly malignant. It has spread to the north and west, into the Republican Party and into the church of Trump.

A godawful way to sum up the history of the rise of the South’s treachery and the continuance of slavery by multiple other names is CRT. Critical Race Theory. Its funny how traitors are triggered by this acronym. Cry me a river.

Truth to tell, the Acronym (a new one to me) is simply shorthand for teaching the truth about the malignancy which metastasized after the Civil War to the point that today in 2021 thirty percent of America doesn’t have a problem with tearing down the half of our government devoted to Jefferson’s neglected angel, equality, even if in doing so they crush democracy.

Any book I write will have this as a theme. My second arrow.