I have sacrifices writing on the blog for half a year to, among other things, campaign for Congress as a local crank, maintain my daily study of French and organize the hell out of fifty years worth of paper that I have strenuously resisted throwing away. I am nearing a preliminary completion of the organization. Yes! in the last day I’ve misplaced a six inch stack of documents from my four most recent political campaigns of 2017, 18, 19 and 2020 but… I’ll find them.

As I’ve poured through them I’ve made some discoveries worthy of blogging about but have mostly resisted that temptation ……. until now. A decluttered office has made possible what I hoped when I began my organizations after getting my office built. More time to write by having all my files sorted for efficiency’s sake.

So along the lines of connections which I wrote about in the first of these posts today let me pontificate about Richard Nixon a bit in light of his Republican successor Donald Trump. I’ll start with a post I wrote a couple weeks ago in Facebook:

Well it was a comparison of Trump with Nixon in which Nixon came out on top.

Nixon did some awful things but he has also been vilified for years far beyond his crimes. History has lots of surprises like Bobby Kennedy’s deference even sneaking into the discredited Joe McCarthy’s funeral. And among the clippings I’ve found there was one I set aside yesterday to read I think for the first time. Its about the early friendship both Kennedy and Nixon shared in Congress and in the Senate before they challenged each other for the Presidency. By chance I just found it too on the Internet. Its worth a read.

And after reading this I thought about a book I bought on the spur of the moment at some used book sale some years ago: The Contender Richard Nixon the Congress Years 1946-1952 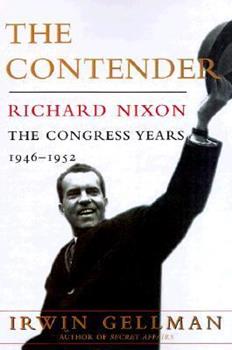 I have not read it but I wondered if it had anything to say about Kennedy or Nixon. I did read the epilogue and it convincingly argued that early historians of Nixon bent over backward to make him out to be evil and pinned nastiness on him that was not accurate. I’d say more but I just got invited to take a walk with my daughter and grandsons. soo that’s it. I’m not sure I’m sufficiently motivated to complete this or edit any of today’s posts. BYE.