Evidence of the Plagues of the Modern Industrialists. I took it tonight at dusk:

“Red Sky at night sailor’s delight”. Right. Except that, judging by other photos that made it to Facebook, the morning skies over Duluth have been just as red. The adage for that is take warning.

The Republican Party’s Dark money plutocrats bankrolled the science denialists because too much science interfered with making profit. They encouraged Rapture Republicans to pay attention to abortion alone for the last thirty years thereby purging baby killers like me from the party. The Rapturist sects of Christianity don’t worry about Earth’s future because according to all the diviners of magic in Bible texts we are overdue by 1000 years for the end times and the book of Revelations. Any minute now as more Red skies pile up on each other we will be waking up to find abandoned clothes from the prosperity gospelists who have been called to heaven where they will no doubt bankroll God for the afterlife.

Red Skies come from fine dust particles that scatter red light as the sun heads below the horizon. I’ve seen it after winds kick up Dakota dust. I saw it after volcanic ash from Mt. St. Helen wafted over Duluth. In recent years heavy Canadian fires did the same thing. Only this sky is almost certainly Siberia better than a third of the way around the world from us. It has caught fire and like the Pennsylvania fires that never go out burning in the old coal mines Siberia’s burning permafrost will remain embers under the winter snow for perhaps the next two or three generations. When the spring melts the snow the permafrost’s embers will rekindle and pour more global warming gases into the air. These are gasses trapped through the last four ice ages. As they are once again released into the atmosphere they will take us back to the climate of the dinosaurs. They lived comfortably through warm Arctic nights back when the oceans were a quarter mile higher because there were no glaciers on the Earth’s land.

Anyone worried about a year or two’s inconvenience and deaths from the corona virus is only looking at acne. As our climate continues to warm death will stalk the land. All Donald Trump’s texts do is simply distract us from a belated effort to save the Earth. If we are already too late then tens of millions of Americans and billions of others on Earth’s sea coasts will have no choice but to move inland. It may be too late. If we continue to be consumed with Donald Trump and abortion and the people who purged science out of our schools and out of the Republican Party a few million abortions will pale at the coming carnage of radical climate change. And check out this year’s record setting beginning to hurricane season.

I have had what is likely a pipe dream that the Republican party will turn to ash like the Phoenix and rise again a new Teddy Roosevelt to protect the environment. A more sober assessment is that it will curl up and die like one of those penny fireworks that burns into a twisting black snake leaving a black stain on the sidewalk.

Don’t vote for the Republicans who treat the Earth that way.

I also recommend this stories hot off the not so fake news press: After a month of blazes that released record-breaking amounts of polluting gases, smoke from Siberian wildfires are now making their way to the west coast of the United States.

You may remember this ominous painting by Edvard Munch. It was painted by Munch after a volcanic eruption he knew nothing about. The artist seemed to understand that it should be taken as an omen.

My tribute to Munch was considerably cooler: 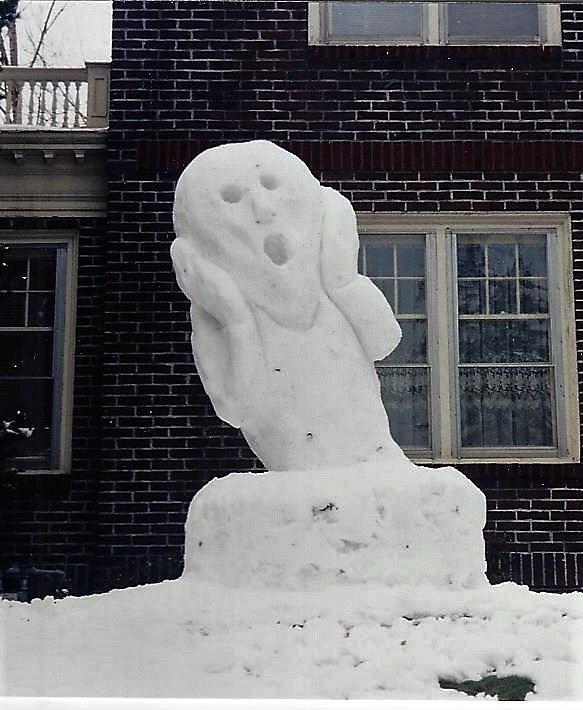