Claudia has only been out of the house a half dozen times since our last church service on March 15th. On that date our church was one of only three that held actually in the sanctuary church services. Since that time we’ve only participated in the Church at a distance on line. Its the first time Claudia and I have sung as a duet in all our married life…..as far as I can recall.

This morning after a pretty thorough night’s sleep after organizing my office for the first time in a year or two I walked up to find my office in fine shape for my corona virus campaign and a month of putting a book together for the campaign.

Behind one wall of my office I have a filing room crammed full of 50 years worth of paper work only marginally organized. But almost everything I need for putting my book together on this side of that storage unit is now at my finger tips. Yesterday I spent eight hours putting everything at my fingertips. As I basked in the organization I entered a question in my google for the heck of it. How many words are in a 200 page book. After twenty years of trillions of googles there is little that can not be found at the push of a finger and a well crafted question. An answer (not THE answer as no such thing exists) was 60,000 words. Piffle. I expected twice that many words. Another related question also popped up how long would it take to write a 200 page book. An answer (again) was five to seven months. I plan to give myself one month. And yet another answer to yet another related question helps explain my confidence that I can come close to managing this. It explained that most writer have oodles of stuff they have already written that they can put into a book and they went on to list three or four of the sources available to writers including blogs. Hell, four years ago I estimated the blog had ten million words in it already. In fact, there is so much available to me in the blog that its like skiing during an avalanche.

Last night I woke a couple times. On the second occasion I read the last chapter of the book on Madison and Monroe by Chris DeRose. Like all my non fiction books stretching back to the 1980’s when I first began keeping track of my “serious” reading its full of yellow magic marker where things of particular note caught my attention. I did it to make finding things easier at some nebulous future date. Founding Rivals is no Exception:

This was among the more useful pages in that last chapter: 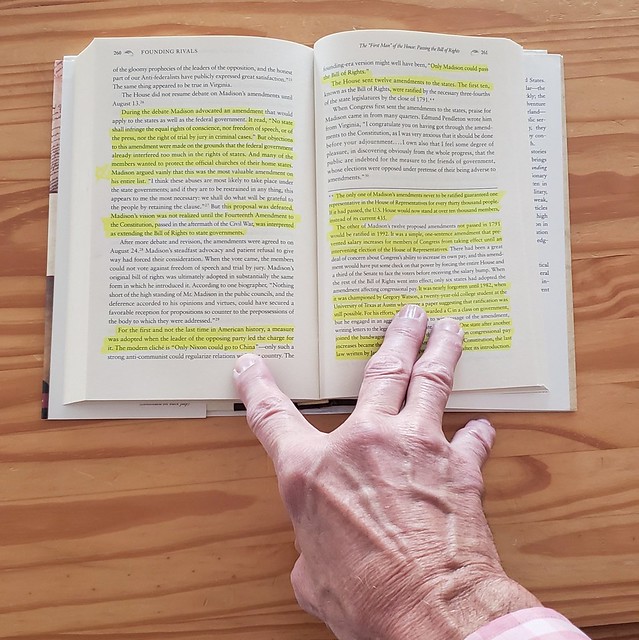 Chris DeRose is a Republican. He helped elect Wisconsin’s Congressman Sean Duffy. He has been less lucky in some of his own campaigns for public office which might be a result of his spending too much time in his head trying to understand the world instead of simply bullshitting his way into public office. Certainly the star of this book spent a lot of time doing that and every American should be grateful to tiny James Madison for towering over his peers in anticipating how we could act collectively under what was then an extremely controversial plan to abandon the incompetent Confederation we created after the Revolutionary War to a Republic that, as critics saw it, could plunder the individual states if a tyrant took it over.

This particular page has a fascinating and rare footnote about the college kid who took the C he got on a paper as a challenge to pass one of two constitutional amendments Monroe was unsuccessful in adding to the Bill of Rights. The kid had written that it was still possible to get 3/4ths of the states to join the six who had voted for it in 1790. It was an amendment which postponed any pay raises for Congress to the year after the next election. In 1982 Gregory Watson lobbied every state to vote for the amendment and by 1992 it became the Twenty-seventh Amendment.

I thought of the effort to pass the Equal Rights Amendment years after it fell a few state’s short of adoption when I read this.

Corona Virus has helped me find the time to organize myself, read important history, and, thanks to the ever increasing incompetence of our President, given me the motivation to run for Congress one more time. We need a few more thoughtful people to counteract the ignorance running amok in Republican-land.

My alarm just went off. Time for me to go curbside and pick up some library books.