I used that phrase in my last video. Here’s what’s on my mind. 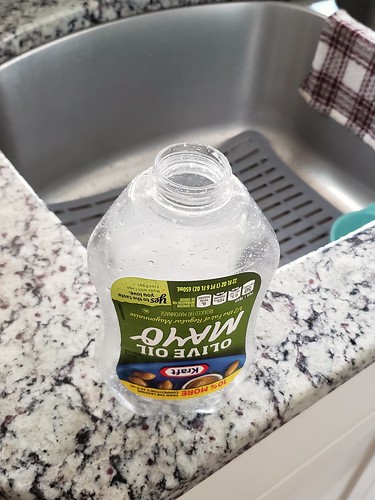 Out of the habit of thirty years I washed this old mayonnaise container but then set it on the counter to take a picture of it. Instead of recycling it I tossed it the trash. I’ve probably spent several weeks of my life fussing around with cleaning plastics that will end up in the landfill. That’s what last week’s Frontline led me to conclude. Recycling in big oils last gasp. They make plastic and encourage us to recycle as a civic duty. They have done this since Earth Day began in the 1970’s to put the responsibility on us to do all the work. There is no market for anything much more than soda pop bottles. The rest is land-filled and always has been. Except what we send to third world countries for them to landfill or let flow into the ocean.

If I was in Congress I’d push a law hard to put the government into recycling everything damn the cost or find alternative containers. And its not just food containers. The clothing on our back is all too often carbon based and also ends up in the ocean. I can’t find today’s NYT but here is another one explaining that 60% of the clothing on our backs comes from oil not cotton. It is close to industructible. Now 7 billions of people copying the wasteful example of Americans are filling every living thing up with plastic: