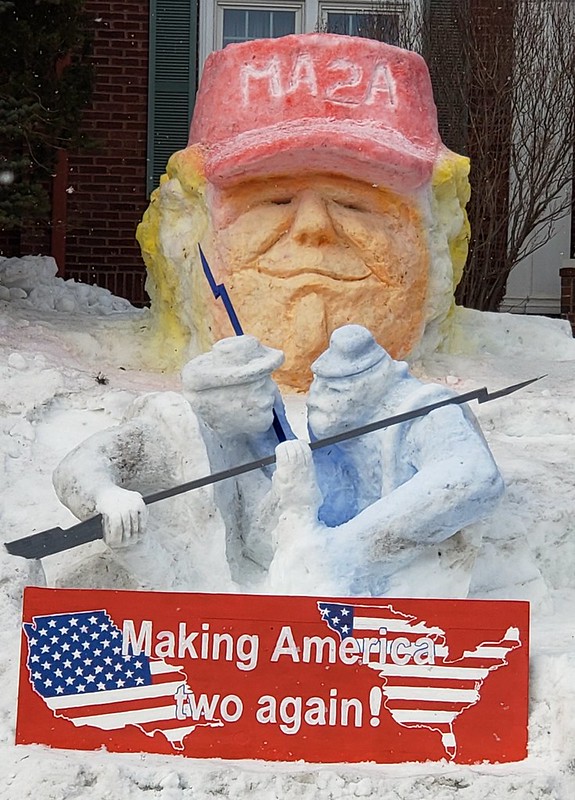 As I was putting the final coats of gray, blue and orange on my sculpture a photo journalist from the Strib, Alex Korman, was chatting me up and taking some shots. I was pleased that my work was not tampered with last night. The Rebel Gray isn’t very easy to see and will disappear as the day warms but I’m quite proud of my message and pleased that there were some news folks in town who took notice of it. Alex was awarded the White House’s student photographer of the year award last year and the president himself signed the award winning photo for him. We had a lot to talk about…..meaning I wouldn’t shut up. BTW – you can see the photos for which he was honored here.

In the short time afterward that I scraped some dangerous ice off of my sidewalk a lot of folks stopped to shoot their own pictures. One gracious lady commented that it was a very nice message and not nasty at all. Another lady who thought it was pro – Trump was confused about the meaning of the Civil War soldiers. I explained that the Party of Lincoln is best known for preserving the union. I then said it was ironic that our current Republican president seemed to be working overtime to undo that stellar accomplishment. She grew a little concerned and asked if I was in favor of having Bernie Sanders in the White House. I replied that I liked Bernie but that I’d prefer that he not be our next President. Actually, I’d prefer that he not be the Democratic nominee.

There are waaaay too many oldster voters who never learned that communism and socialism are dramatically different and that America has been a partly socialist nation since Social Security which they all count on and adore and protect fiercely. To my knowledge none of these old socialists are either communists or totalitarians. They just don’t know that they are socialists.