In our current atmosphere a day can spin you off in new directions. I have written two columns for next week’s Reader and now I’m about to shelve them and write a third. My Snowsculpture plans, however, haven’t changed but they may have sped up.

Anyhoo, this is my latest enthusiasm: 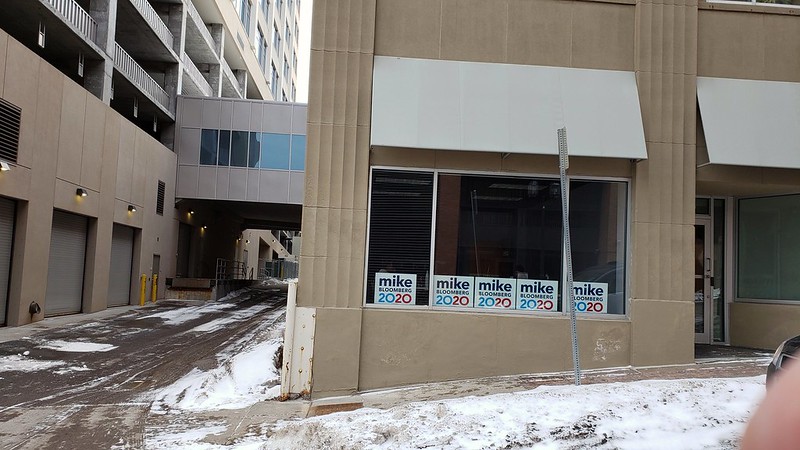 I read about Michael Bloomberg’s Duluth Office opening last night in the Strib and then looked for it in the DNT. Here’s the DNT version.

I sent a couple emails to DNT reporters asking for the contact info for the Bloomberg staff but it was late Friday night and they probably won’t see it till the new week begins on Monday. There is going to be a mini open house tomorrow, Sunday at one, according to the story. I wasn’t sure I could make that as Sunday is a family day for me. But I reasoned that Nicole would be fussing around in the new headquarters today so a little after noon I sauntered over. Sure enough two people trying to pry heavy duty vinyl signage off of their picture window overlooking 4th Ave W. I parked, hopped out and lent them a hand. After some strenuous effort we got the lower half off. That let some light into their headquarters. We chatted a bit and I left. But the work wasn’t done. I returned a short time later with a step ladder and razor to remove the upper half. I took over some paint supplies too because they will want to spruce up the office until Mayor Mike is out of the Democratic nomination or becomes their candidate in the Presidential Sweepstakes. I think our Billionaire class helped screw up America and I find it poetic justice that it might be a much bigger billionaire who cleans up the damage of a much tinier piranha.

Josh, the director, is a local boy and a 2008 graduate of East High. Nicole, another Minnesotan, is his assistant. She told me she came from reality television and when I asked if it was “The Apprentice.” It wasn’t but she knew some folks from that show. They told her they learned never go into any room alone with Trump.

I warned the pair that I’m something of an acquired taste in Duluth but said I’d be happy to offer them advice. I told them that one of the more refreshing things about Bloomberg was that he’s the only Democratic candidate training all his guns on the real menace, Trump, instead of looking over his shoulders worrying about the other Democrats. I explained that the minute I heard Bloomberg take a nasty shot at any of the others I was outta there. I’ll accord Mike a little more leash if he makes it to the debates. Goodness knows he’ll be a big target since he wields fortune that dwarfs Trump’s grifting.