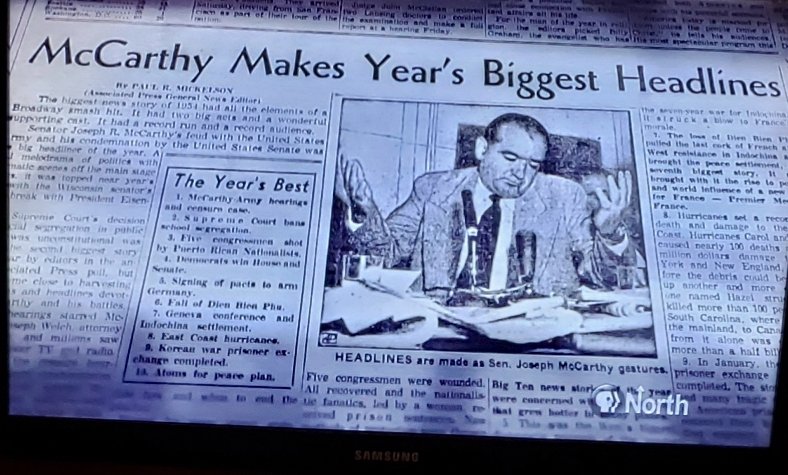 Today is not the first crisis of the Republican Party.

As always the American Experience did justice to a slice of Americana. 70 years on its treatment of McCarthy was even handed and swept a few myths away. There is no doubt that Joe was a bully and that he used worrisome news headlines to stoke paranoia and promote himself. At his zenith few would cross him. One who did, Senator Margret Chase Smith, is remembered as a hero. There are not so many today. Most are closer to today’s Lindsey Graham

A couple things stood out for me. First was the behind the scenes work of Eisenhower to expose McCarthy for the man he was. The other was a loyal following of Republicans, about half of that Era’s Republican Senators who voted against his censure and who also attended his funeral in Appleton Wisconsin in 1957.

I tried looking up the names of those who flew out to Wisconsin but only found this story of Bobby Kennedy’s cautious attendance. I was well aware of the irony of Bobby’s work for the Senator. The AE piece made no mention of it but his face did show up on one of the historical stills of the McCarthy hearings.

I did find the votes here. Goldwater voted against censure and so did Everett Dirksen. Ironically all the Southern Democrats voted to censure McCarthy except JFK who cast no vote no doubt to make sure he didn’t muddy the waters for his later ambitions.

It occurred to me that this episode might be a helpful precedent in GOP history to explain the Trump era. I’ll be pondering that possibility over the next few months.