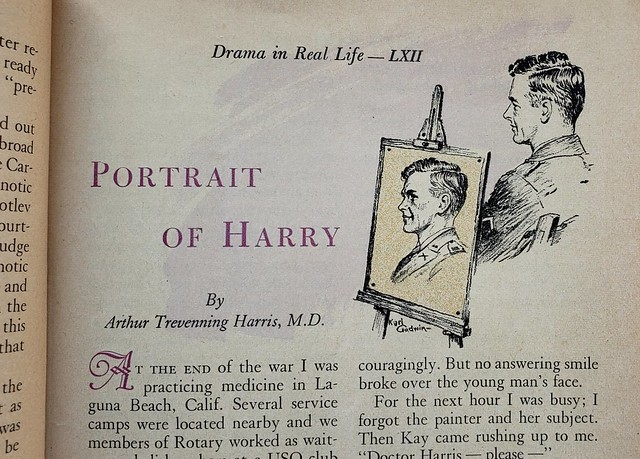 The beginning of a “Drama in Real Life” published in the Reader’s Digest magazine exactly 70 years ago this month, November 1949 four months before Harry Welty came into existence as a zygote.

A couple years ago my friend Donna repaid the snow sculpture I made for her as she was undergoing chemotherapy. She had found a collection of a dozen old Reader’s Digests from the period between 1945 and 1953. These were the years of Harry Truman and the courting and marriage of my parents. It was also the when I came into existence. Although it was only last week that I began to peruse them it was the perfect gift.

In 1963 I was the new kid in my junior high. I had a funny Kansas accent. My seventh grade English teacher, Mrs. Jones, may have recognized this. After we read Treasure Island and she administered a long test on the novel she announced to the class that one student had gotten a perfect score. She asked us to guess who the student was and many top-notch scholars were suggested. I’ve never forgotten my surprise and quiet delight when she announced that I was that scholar. The “Reb” had done OK.

I was never much of a reader in grade school with the exception of the newsy Weekly Reader. To this day I’m not much of a fiction reader. I did eagerly page through my Dad’s photo magazines Life and Look as a kid. I like to get things done quickly. I’ve always much preferred watching movies distilled from books that would have taken me ten or twelve hours to read. As it happened Mrs. Jones had the next best thing to Cliff’s Notes. It was a classroom subscription to the Reader’s Digest. She pulled them out frequently to have us read. I particularly remember reading “The snow goose” an affecting short story about saving the British army at Dunkirk and a gripping account of the Congo’s “Stanleyville Massacre.” Whenever we finished our work we were encouraged pick up a Digest and read in our free time. I particularly liked its jokes and anecdotes that anyone could submit to the Digest for a quick ten bucks. Mrs. Jones always had us attempt to answer the twenty tough vocabulary in each Digest to increase our “word power.”

The summer following seventh grade my Mother rented a cabin on Lake Pokegema near Grand Rapids for two weeks. We found it full of old Digests. I spent a lot of my free time pouring through them. The Reader’s Digest was founded in 1922. It took interesting articles from hundreds of other magazines and whittled them down (digested them) significantly. They also published pieces submitted directly to them. The Digest was my entrée into a world not unlike today’s where I can read eclectically my cell phone..

My Grandmother, also a middle school English teacher, got wind of my enthusiasm for RD and got me a subscription for my birthday. I read it avidly through my high school graduation and only tore myself from it as my snobby college years made it seem bit unsophisticated. Looking at these old Digest’s has renewed my appreciation for the magazine. Like me, RD is wildly eclectic.

The page top above was the second story in the November 1949 issue, being named Harry myself, I couldn’t resist reading it. I have no idea it its author changed the names of people in his story or not. I’m not sure if journalistic ethics were much different 70 years ago. Told in a straightforward way the story brought me to tears in five pages. (Now that I’m an old fart I don’t have to prove my tear-free manhood like I did when I was thirteen.)

I thought about taking this long-forgotten story and putting it in my blog. I wasn’t certain how the copy-write laws worked and did a little research even looking up the contact information for the Digest which is now also online. I have no idea how protective of neglected old content today’s Digest is but they probably wield a republication veto over everything they’ve published since 1924. I intend to make an inquiry soon. If the Digest permits it I’ll likely digitize the prose and share it.

As a tease I’ll just mention the story’s ingredients. An artist drawing veterans to honor their actions in war, something that is being repeated today. The way children of the past were passed from family to family. An astoundingly., remarkable coincidence. Aching loss.

Here’s the table of contents from the entire November, 1949 issue: 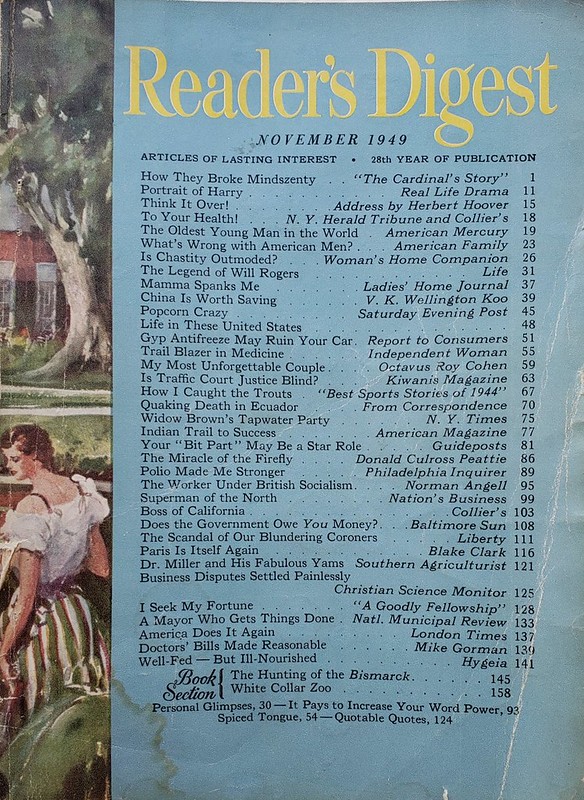