My eight loyal readers might recall that after I blogged the then forbidden info that the School Board had agreed to sell New Central for $10 million dollars I was the first to admit I was a “bonehead.” I even voted to censure myself along with my board colleagues who were eager not to pass up the chance to embarrass me. Well, I’ve just discovered that I’ve been very boneheaded all summer and fall of my school board campaign.

Last night I got a wonderful call from the widow of a former school board colleague who I regularly irritated. She was surprised to see that I was on the ballot and wanted to let me know she supported me and wished me good luck. The only question in my mind was that I knew her address was just east of my 2nd District seat by a block. I mentioned this to her but couldn’t let this cartographic puzzle go.

I slept a little late this morning because at ten PM last night I headed out to retrieve my lawnsigns along all the busy roads that had fallen quiet for the night. It only took me till a little after midnight because I scrupulously avoided putting them in residential spots that would require my having kept much better track of them. I am a committee of one as you might remember. This is one of my hallmarks as a candidate. I don’t leave many homeowners with my unsightly post election lawnsigns stuck in their yards.

Well this morning I spent a little time looking through the Trib’s election coverage especially the precinct by precinct results. Sure enough there was Precinct 3 which I spent not a whit of time campaigning in. They didn’t get my mailing. I had no lawnsigns in their westernmost portion of Lakeside. I got creamed there…..but to be fair I got creamed in every precinct. I took from this the insight that I simply wasn’t going to win.

I was not outspent or out-campaigned. I would have let down my contributors had I sat on my duff so I was busy all through the campaign. I just don’t think the campaign was mine to win. The Trib’s editorial endorsement was not likely what killed me. It may have confirmed for its few readers their own doubts about me but I’m so well known that in 90% of voters minds they didn’t need any confirmation bias to vote for or against me.

While David Kirby may not be a very familiar name Name ID was not my problem. I’ve made my bed and most of those coming out to vote preferred to have me sleeping in a bed of snow. In East Duluth my support of Art Johnston did not go down well. I made a point of mentioning it in my letter to let people know I was proud to support him. Frankly, I think those who came to the polls were just tired of me. “Don’t do away mad, just go away,” would have been their mantra. They may take little comfort in my return Reader column at the end of the week because I explain how I plan to live to age 100.

I think the hardest obstacle for me was that this election was a repeat of the 2017 post Trump election. In that one a tidal wave of people looking for payback regarded anyone who didn’t have the DFL endorsement as suspect. Many of them probably had only a modest idea of what the local non-partisan candidates stood for including me. I just wasn’t on the list. And while that ferocious movement had softened a bit in this election it won’t dissipate any time soon. I simply was not on the DFL and Labor flyers that were sent out.

Loren Martel, who did significantly better than I in his 3rd District race, told me he was worried that my putting up Welty lawnsigns next to Alanna Oswald’s signs would cost Alanna votes. He told me of people who were angry at me for attacking Trump who would then vote against Alanna. Looking at today’s precinct by precinct results I see little evidence of that. However, I would guess that Alanna’s signs probably helped me. She won convincingly after all. The failure of her opponent, a former DFL chairman, to get the DFL endorsement was a much bigger deal. He got labor endorsements but his name was not on the DFL postcard.

I’m pleased with the outcome of the election in several respects. I like all the School Board winners. I feel freed from the last remnants of my fight against the Red Plan. I’m glad I gave my contributors a strong campaign even if I was a bonehead. At the bottom of this post is the map I made at the outset of Summer. At some point I drew a light blue outline on my district and left out precinct 3 which has a light pink border I should have followed. I folded the map and placed it in my office without this significant precinct and didn’t think about it again until I got that call last night wishing me well.I’m not a believer in God or omens but its hard for me not to think some sort of divine intervention diverted me from playing with a full deck.

I choose to take that as a sign that another four years on the School Board was not meant to be. When Claudia told me I was behind two to one with 25% of the vote in I knew it was curtains and stomach dropped for a spell. It only lasted a few minutes. But today it feels more like Armistice Day 11/11/1918. My School Board war is over.

Here’s my map with a faint purple circle around the neglected precinct 3 in the lower right-hand corner: 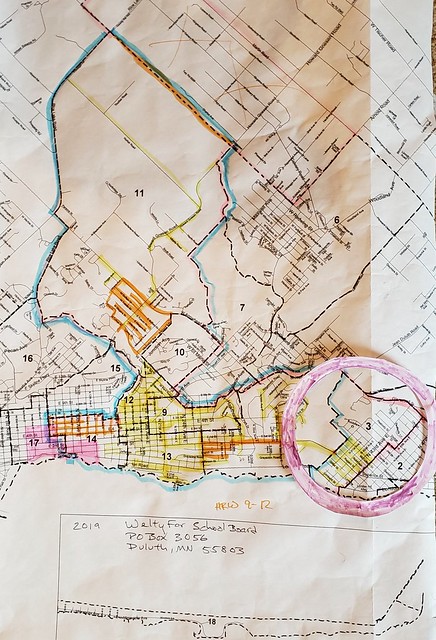