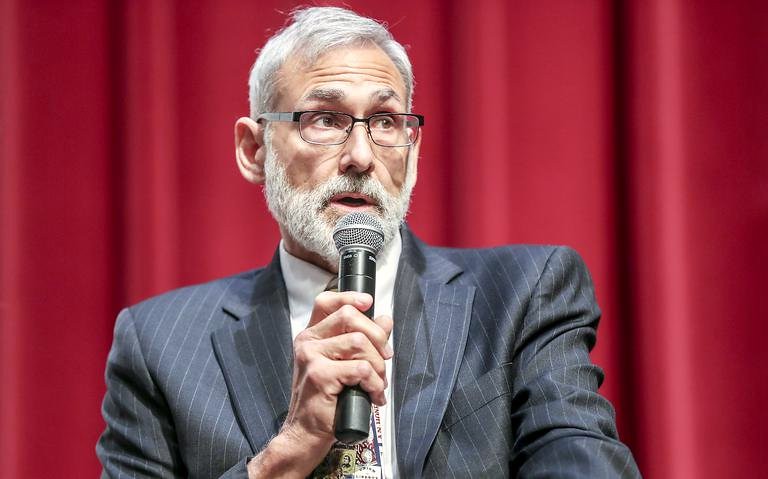 Duluth School Board District 2 candidate Harry Welty speaks during a candidate forum sponsored by the Duluth News Tribune and the Duluth Chamber of Commerce. The forum was Sept. 24 at the Duluth Playhouse Family Theater at the Depot in Duluth. (Clint Austin / caustin@duluthnews.com)

Ten years after the Supreme Court legalized “separate but equal,” my grandmother rode her horse to an all-white Monroe Elementary School in Topeka, Kan. Fifty-six years later, the Supreme Court ruled that Monroe, now a segregated all-black school, was unconstitutional. The court ruled that even if white and black schools were treated equally, forbidding black children from attending schools with white children treated them as inferiors.

Three years after Brown vs. the Topeka Board of Education, I attended another all-white elementary near Monroe. In the first week of school, 100 black children from segregated schools were shepherded into our classrooms. Five years later, I was one of 14 white children in a sixth-grade class with 17 minority students. As the Supreme Court had hoped, I was vaccinated against any thought that I was superior to my black classmates.

My social DNA was formed in that integrated school, but my school’s integration was the exception. Over the years to follow, our nation’s schools re-segregated. When my dad was offered a job teaching law in Mankato, Minn., I found myself in an unfamiliar sea of white children.

Nevertheless, the issue of equity had taken root and came with me to Minnesota. In 1968, the year Martin Luther King was assassinated, I slept in a room with the first black student ever enrolled at Mankato High School. Bedru, an Ethiopian exchange student — and a Muslim to boot — was our family’s guest for the year.

I moved to Duluth to teach in another all-white Minnesota school 45 years ago and learned Duluth’s dirty secret. A 1920 lynching kept black Americans away until the Cold War gave Duluth a military base.

Among my Red Plan warnings was its uneven division of Duluth. It would re-segregate an integrated district. Along with this it traded 100 teachers ($10 million annually) for new buildings. Today, Duluth is not only more segregated, it endures overcrowded classrooms.

No one can fix our schools in 500 words, but I have spilled millions of words on this subject into a blog after retiring from my first eight years on the Duluth School Board. Since then I’ve served four more years. I’m once again offering my considerable experience to Duluth.

As bleak as our school’s current situation may seem, there is an opportunity to restore our schools with a new superintendent and School Board. We can have schools that rival the best public schooling Duluth has ever offered — despite the Red Plan’s bond repayments.

As we work toward this new birth, we must remember the rising of the oceans, the land’s parching, paving and flooding, and a sixth extinction that all are coming with climate change. Our children must be prepared.

I read that Duluth’s St. Mark’s church, founded by freed slaves, is inspired by the African principle, “Sankofa,” which means “to look back in order to move forward.” If I am elected to a fourth term on Nov. 5, that is the spirit I will bring to the Duluth School Board.

Harry Welty is a candidate to represent District 2 on the Duluth School Board. The seat is up for election on Nov. 5. He wrote this at the request of the News Tribune Opinion page.

Dr. Kirby’s column is something of a laundry list. He didn’t miss anything and you can read his comments in the Tribune here. By the way, The Doctor’s wife, a fellow general practitioner, oversaw the nurse who gave Claudia and I flu shots at the Mt. Royal Medical Center today.