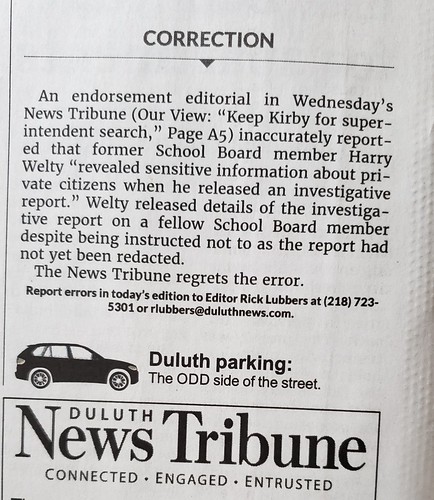 When the electrical power to my house is restored I will post the picture of the Trib’s correction of their claim I released an unredacted report to the public. (Our house is being rewired as a safety precaution.)

I looked for it on the editorial pages where I was bashed in a tepid endorsement of my rival for the office. I didn’t expect the correction to undo whatever damage the faulty editorial did to me but, on reflection, I rarely look for corrections. I am sure I’m not alone.

The electricity is back on. Couple thoughts:

I’m not pleased that the correction of an untrue factual criticism of me in a column justifying an endorsement of my rival is so paltry. After faulting the old School Board chair for letting a potential danger to our children be placed next to the Superintendent without sharing this information with the other school board members the Trib now feels the sole objection to my election – my release of the price tag for a Central sale is worse. It is evidence of my “divisiveness.” In other words whistle blowers can’t be trusted. How Trumpian.

Furthermore, while there was a small chance my mistake could have cost the district the Central sale it didn’t. Chuck, when he left a message, told me that saying the sale fell though after I released the information was not wrong. True. However, the Trib left the implication of cause and effect to stand. I can only hope most readers can remember the truth of things and conclude the Trib was peddling Fake News.

That said, I’m hoping most folks don’t get past the first few paragraphs which were not kind to the former Chairman.

Look for my op-ed piece on Thursday. It will probably be side by side with the old Chairman’s sales pitch. I’m very pleased with my 500 words.