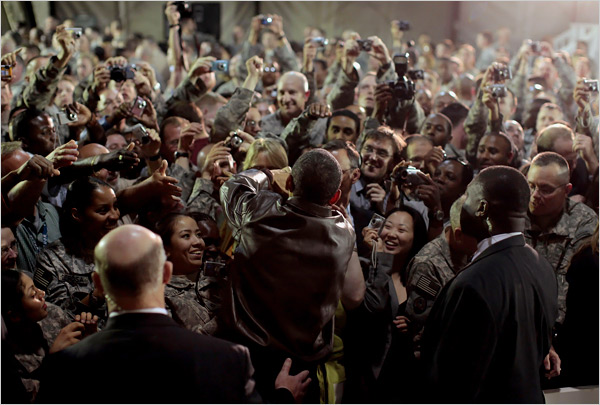 A couple days ago a very good friend who is Afghanistan sent me several photos that he had taken of President Obama’s appearance before our troops. They were obviously shoulder to shoulder. Today I found the New York Times photo of the President and low and behold my friend is in the picture, although he is largely obscured by the President. But I’d recognize his ears and hairline anywhere. In the photo his left ear is a quarter of an inch above President Obama’s right ear.

I’m not sure how sensitive my friend’s situation is so I won’t mention his name. He’s not in the military but he has sent me some pointed commentaries on our situation there. Like me he seems to be a bit of an agnostic about how well things are going. For those who know me they will be unsurprised to learn that agnosticism is my favored attitude about complex issues. Skepticism is the best defense against other people’s certainties.

My friend told me that the military folks in the audience raved about their Commander and Chief’s speech.