Having told my whole town about how I was witness to a fizzled out train I’m just popping to speak my mind about a whole lotta stuff. Claudia just ordered a book for us to read and I am a little PO’ed that it covers a lot of what aggravates me – My last 50 years watching the Republican Party pulling train on America. Look it up in the “urban dictionary.” I want to write that book.

The book is called “Fault lines” and I just took a couple of pictures of it but can’t manage to transfer them to the blog on my cell phone. I will attend to this post too, just like the previous one, later on. Probably before I go to bed tonight.

I am going to get my daily French practice in first. OK done. Here’s the book on my lap. 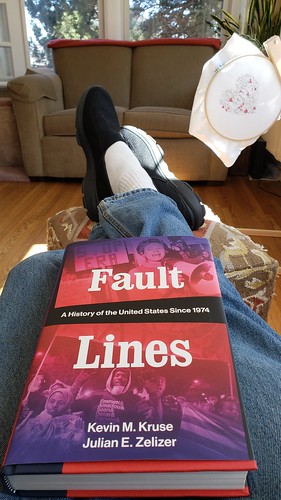 I did read the first seventeen pages to Claudia. It starts just days before our wedding as Jerry Ford was settling in as our new President. Its a good recap even for someone like me who was glued to the television through much of the tumult. It was almost fifty years ago.

Here’s one of the pictures of Jerry Ford who I very much liked and appreciated for pardoning Nixon. 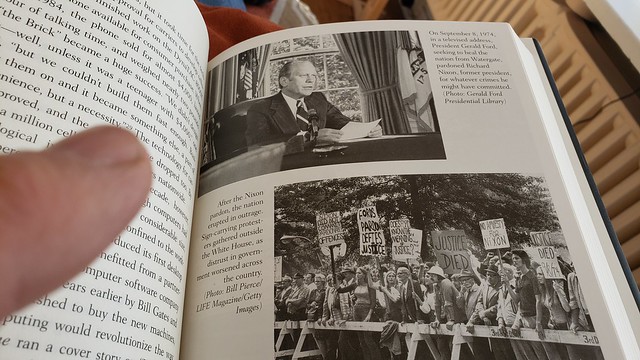 The picture below it shows how he caught a lot of blowback from kids who wanted to see Nixon in prison.

Impeachments in our nation’s history have not been pretty. That’s a small part of why I would prefer to avoid one over Trump. It would only serve to make him a martyr and that is one pedestal I wish to deprive our Sleazebag-in-Chief from clambering up onto.

When I started this post yesterday I had a few other things to say but 24 hours can distract a fellow. For instance today I was sent Bill Maher’s thoughts about how Robert Meuller let America down by not calling for Trump’s impeachment. Here was my reply to that:

I understand but I don’t agree.

Trump is a symptom of 40 years of Republican mismanagement of America, the world and the Earth. If this was 1974 we could do what Bill Maher wants but its 2018.

Mueller, by being back-breakingly fair, has convinced a majority of Republicans, Democrats and Independents that his report was fair. That is a major accomplishment and something to build upon if we are going to knit the nation back together.

Using Mueller’s work to impeach Trump will deprive America of what we desperately need. To defeat Trump in a fair election.

To do otherwise will likely postpone any healing for a generation.

We all, Republicans, Democrats and Independents have a lot of work ahead of us for the Nation, the world and the Earth. Leaving the air poisoned with payback is a lousy way to start in on this work.