For the last two months I’ve been avoiding the last great organization of my house – the higgledy-pigaledy files I’ve successfully brought together up in my three year-old-office. Two months ago I was about to attack them when I let myself be distracted by, of all things, stamp collecting. I left roughly one third of my office floor with stacks of yet to be filed stuff.

I’ve been waiting for something to kick me into gear again. I cranked up the heat an hour ago, and its pouring out furiously with the zero temps outside the roof above. But I got distracted again. This time it was by the gift my daughter got me for Christmas. I’d let everyone know I wanted a copy of the book below on the right. Its called “The Faithful Spy.” 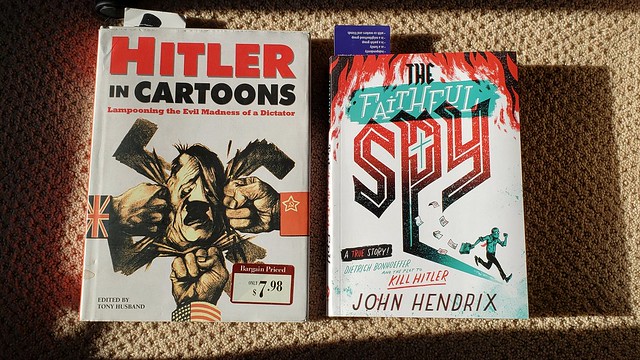 Next to it is a book I randomly found as a remainder. Its chock full of historical cartoons of Adolph Hitler’s rise and fall. Recent events call this man to my mind. I’ve been nibbling at it for a couple months.

I parked myself and began reading the book about the attempted assassin who Hitler would later execute for trying to topple him from power. I haven’t read a book since I finished one on Napoleon right after getting back from my trip to France in October. I think I need to read a good book on a sobering subject to light a fire under myself. After that and after the office clean up I’ll have run out of good excuses not to start writing my own book.