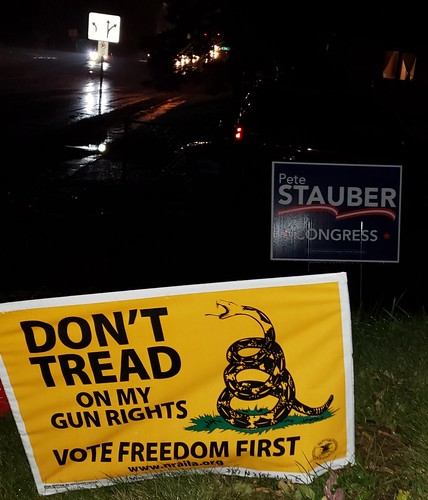 As I returned home half an hour ago from Walgreens I saw these two lawnsigns paired together two houses below my home on 21st Ave. East. Today, at a funeral for a member of our church, we learned about the murder of eleven people at the Tree of Life Synagogue in Pittsburgh. It was six blocks away from where our pastor grew up. Her husband was so angry that he said he never wants to hear Donald Trump’s voice again. The President did imply that it was the congregants own fault for not having guards with guns at their house of worship.

I’m prepared to listen to our President for the next two years, unpleasant as that will be, because you never turn your back to a viper. That’s what I find so ironic about the this paring of signs. Pete Stauber is a cop who was shot in the line of duty. That’s just what happened to Ronald Reagan! But look at the difference between them. NRA darling Reagan got behind the Brady Bill and helped it pass in the early years of the Bill Clinton presidency.

If anyone should be in a position to suggest that compromise is due in the area of gun regulation its Pete. But Pete’s guilty of what I’ve found so detestable about politicians since my first campaign. Winning is Pete’s highest priority and far below winning is principle. Principle is down Pete’s “to do” list somewhere below buying paper plates and sporks for his election night party. Pete Stauber is a coward although if he becomes our next Congressman you can count on the Draft Dodger, Donald Trump, to call Pete a winner. To this President a “loser” is a fellow like Senator John McCain who risked his life for his nation, was captured, imprisoned, tortured and left a physical wreck but with his honor intact.

Because those worshipers in Pittsburgh made the mistake on not arming themselves to worship got they made Donald Trump the greatest victim of this tragedy. Where do they think they live?