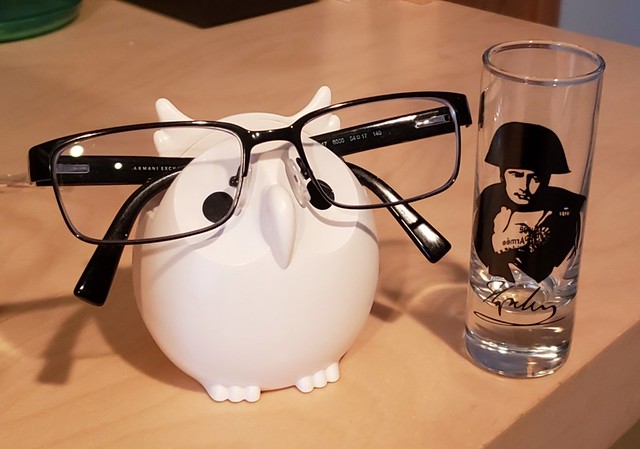 I know such a peculiar picture may seem an odd way of following such a heady blog headline but sometimes life is absurd.

The Congress of the United States just bent over backwards NOT to find out if an attempted rapist was about to be placed on the near sacrosanct United States Supreme Court. My owl and Nappy don’t even begin to compare.

The – at this moment – imminent bare minimum vote of approval for the aggressive dick is about to take place. So let me tell you about what I brought back from France.

To grace my office I bought a couple small items of memorabilia. First, an eyeglass holder from Dijon France whose symbol is a lucky little owl that is half worn away from centuries of people rubbing it for good luck. Second, a shot glass with the iconic image of Napoleon on it which I will use to hold toothpicks. I acquired this at his shrine and burial site at Paris’s Museum of the Armee. My wife and I are not big shoppers but we bought some fun items a few of which we share with our family (meaning mostly our two grandsons)

My acquisitions are book heavy with at least four for me. One is a deliciously smart and brief life of Napoleon. Its the third book I recall reading about the little dictator. Another is about the archaeology of digging up World War 1 battlefield sites. Two more are in French to help me with my french language studies should I decide to persevere. One of these is french translations of Calvin and Hobbes cartoons and the other is one of my grandson’s favorite Wimpy Kid books translated into French.

By the way, my attempts to use French were few and semi-futile. My greatest achievement came in the last few minutes of France when our taxi drive asked us which gate in the terminal two we would be flying out of. We had told him AY (2-A) which is how the French pronounce the letter E. I quickly corrected this to a as in at so we didn’t get taken to the wrong gate. I need another year of study to overcome the many English speaking service workers who found it much easier to use their Anglais than deciphering my mangled French. If I do continue studying I’ll probably replace the two hour daily sessions for 45 minutes a day. I have other priorities which the continuing discord in America has intensified but which my year’s study of France has helped given nuance.

I need to be more patient like the Republican Party, the Koch Brothers and the Federalist Society all of which have just gotten gotten their way. (Remember the old maxim “When the gods wish to punish us they grant us our prayers.” Undoing this by revolution will only do more damage in my estimation. That’s the moderate in me…..the moderate ridiculed and purged by the amoral ne’re-do-wells who have taken over the GOP.

I hope that my contribution to the battle will be some longer form writing than my short pithy blog posts. It remains to be seen if anything I write will be worthy of note or noticed. Wish me well but don’t turn your back on my blog just yet. It may have a few more surprises left in it. I fudged for the past month by reposting my Facebook entries but I hope these did not too badly disappoint my “eight loyal readers.” My heart is still in a good place……..And by the way. The Good Place is a superlative hoot. Watch it……from the beginning on Netflix. Its about one of my favorite ideas – redemption.