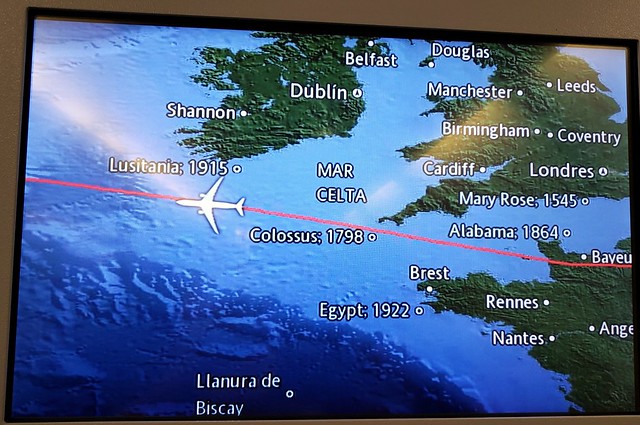 Even when I haven’t just returned from France my head is often bursting with thoughts I’d like to commit to the blog. France has only given me lots more with the counterpoint of my very positive experience in France counter to the national trauma I’ve come home too.

I’ve been back in the states for 22 hours and watched PBS news hour. I’m reminded of the great war that Gulliver found being waged on the Island of the Lilliputians over which way to open a soft boiled egg. Only its not a trivial issue trying to decide which of two idols is Satan is which is God.

So, here’s a picture of the planes map showing its location as it left France and headed for the US. I thought it was very strange that a plane flying overseas with sometimes fearful passengers would plot the wrecks of sunken ships on a map. More showed up as we neared the US including the Titanic, the Andrea Doria the Hunley and some Spanish treasure galleon.

That’s a much less significant question than how America will come to its senses. I don’t have an answer to either question at the moment. I’m going to bed. Good night.