Yesterday I would have made my father proud. I drove a few miles away to cross the Rhine to be in another country – Germany. Other than the language little more than east and west distinguishes the opposite banks. Both are well farmed, manicured and tidy.

My chief objective was in France however. I wanted to find Kutzenhausen where the Seanors emigrated from. Charlotte Seanor was my mother’s beloved grandmother. Seanors were German although I have no idea which nation ruled over them when they immigrated to America. I wonder if my Grandfather gave that much thought when he sat in the trenches a hundred miles further west.

We stopped in Haguenau first before all French restaurants took their traditional 2 to 4 PM siesta. I had Claudia snap a pic of me to text to our grandsons to make them jealous.

Although we did not find a traffic sign I did find evidence on a municipal van of the village’s existence. By chance I had caught the village in a picture over the backs of two black horses when I stopped to record the countryside. Once in town I was greeted by a reception committee of one small cat.

Having accomplished these missions we turned back to Colmar driving past Alsace’s wine roads. Heading into town we passed the tribute to local-boy-made-good, Frederick Bartholdi, in a reproduction you might recognize. Duluth has a smaller version too; a gift from an heir to the great man. I had Claudia pose for a pic too in the spiral staircase of our vintage hotel. Vintage 1361. We have climbed a lot of them over the past 3 weeks. 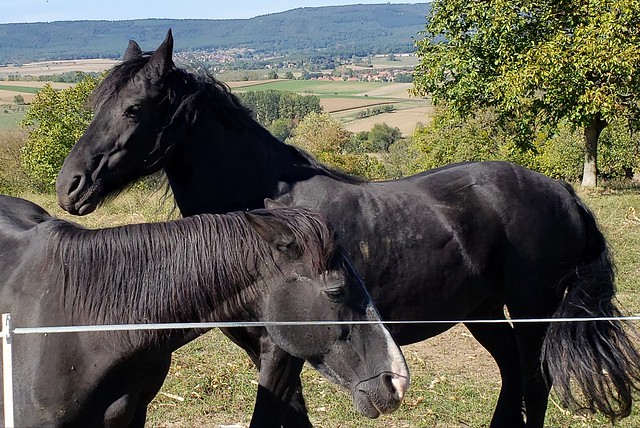