The Title says, “Eighth and ninth days, I am sorry to be late.

Couldn’t be helped. My wifi connection petered out in St. Malo so I have two days to catch you up on. I heard a Brit use that “catch you up” phrase a couple days ago. I will continue with the easy peasy method of copying in my text from my daily Facebook posts. They tend to me more muted in their politics and very short by my blog’s standards. They do however inundate my friends with pictures which I limit here on the blog. and so……Day eight.

No Mont St. Michael for us after all. We saw impressive tides here at St. Malo and more than enough people spread out inside and outside its impressive walls. Claudia’s loadstone for today was the novel “All the light we can not see.” It was about two compelling characters at St. Malo through its destruction by allied bombers in WW II. We found the book on offer at a bookstore here.

The citizens rebuilt the ruined town as a near replica of what it had been formerly. It’s very picturesque. At low tide Claudia and I walked out to the nearest of the island forts built to protect the town from naval reprisals for harboring daring corsairs (govt approved pirate businessmen).

We met a delightful German quadralingual tourist when she asked me to take her picture on the beach which she reciprocated for us. She teaches French and made me feel better by assuring me that it is a hard language to learn. 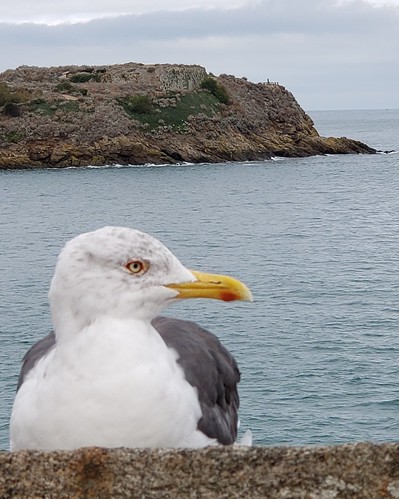 Four hours of driving and a couple hours doing laundry didn’t leave me much time for picture taking. That won’t be a problem for the next two days in the heart of the Loire Valley, playground of French Kings. The first pic is outside my room this morning where our bedroom was as cramped as the streets of St. Malo. Today we splurged moving into a 14th century chateau that has a bathroom half the size of last night’s accommodations.

We had a lovely evening in cafe riddled Ambois, final resting place of Leonardo Da Vinci. Our cafe served us lapine (rabbit) and other fine victuals. Our third outstanding meal in France. Julia Child was right.

On a more somber note I also took a picture of Amboise’s memorial to its lost youth of World War 1. Every British and French city has such a remembrance, both nations having been bled white with millions of losses on the battlefield. It’s a reminder of what drew me to this coming centennial of the battle of Meuse Argonne.