In 2016 when Claudia and I were in Jerusalem every political know-it-all was assuring Americans that Donald Trump could never get elected President. In 2017 when we were in China older folks were keeping their fingers crossed that the young people’s prediction of a Trump impeachment was overwrought and wrong. This year while in France we find ourselves no longer trying to forget the last two years but watching things back home like guilty gawkers at a house fire.

But France has attractions to distract from our national catastrophe. Last night we decided to check out the jazz scene and found this 700 year old tomb where we stayed for a jazz trio and chanteuse and then an open mike where my seat mate gave his first ever public performance. I told him when he came back that for his was a “bonne debut.” He smiled at that. 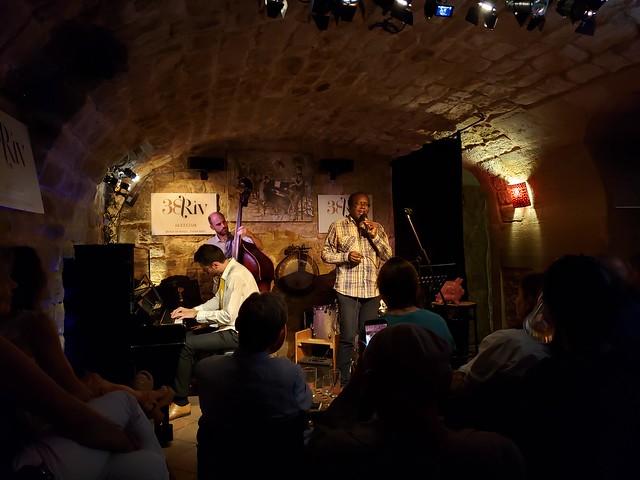 Aujourd’hui (today) we awoke from a glorious night’s sleep with jet lag behind us. Starting a little late we hiked to the tourism center in the former hotel de ville now the Paris City Hall and formerly – 70 not 60 years ago – the headquarters for the German occupation. I think my last post put the occupation in my childhood instead of 5 years prior to my arrival.

There we got a two day museum pass and headed for the Louvre where American artists toiled to learn the art of french culture 200 years ago according to David McCullough’s book . We only lasted there for a little over two hours but I took a hundred pictures many of which will make it to my Facebook Page. I did not want to too severely burden my eight loyal readers.

But here are a few of them: 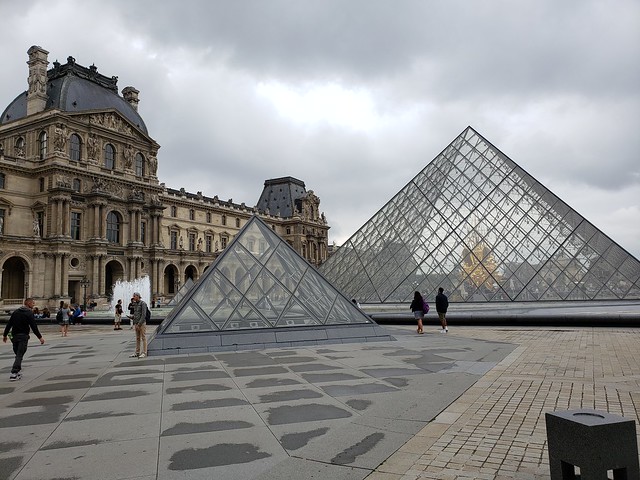 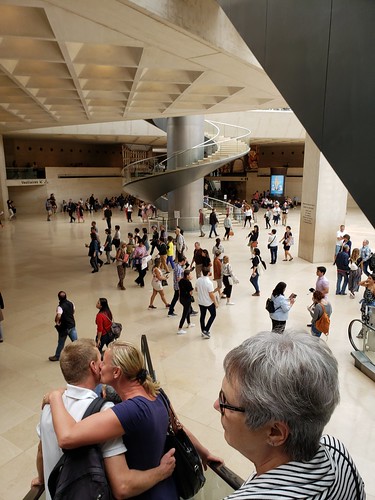 A painting made as a model for a rug (hanging tapestry) for a tapestry factory. (One of dozens) 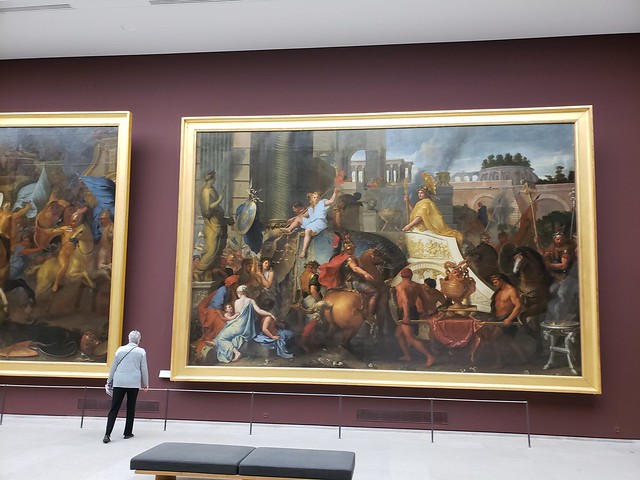 The crowd around the Mona Lisa on a slow day: 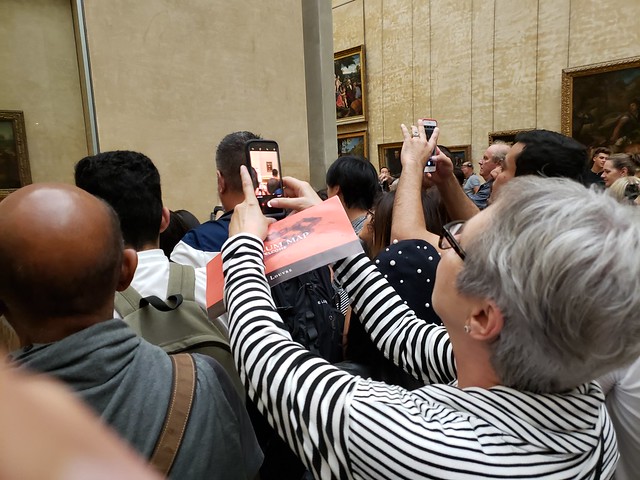 A picture included only to point out the stairway across a vast chamber and the dot sized museum goers climbing the steps. 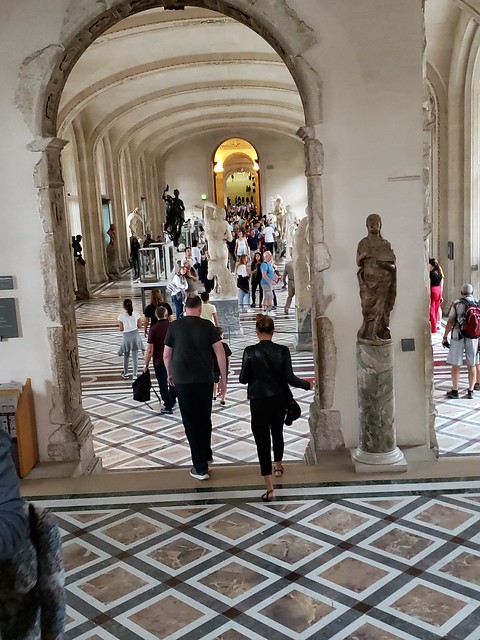 One of several striking items of art I took pics of which I took as a pretty good metaphor for me in France: 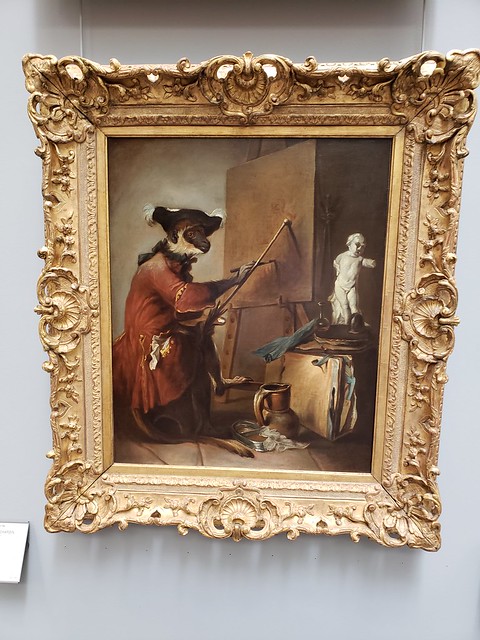 As I told Claudia after we got through about fifty rooms, “Well we’ve seen about 1 percent of the public artwork here now.” Later I commented, “and to think this wasn’t big enough for the Sun King so he had to build Versailles.”

And finally three pics from the adjacent Tuilleries jardin where Claudia and I paused for a leisurely outdoor dejeuner (lunch) for which we both ordered crepes and vin. It shows the practical application of our artwork by some of our fellow living creatures: 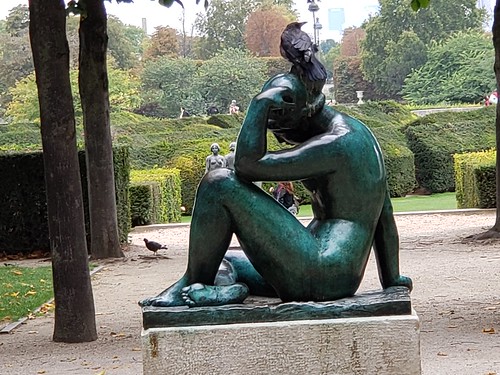 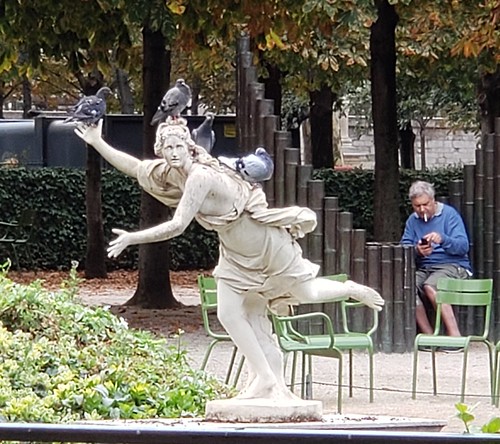 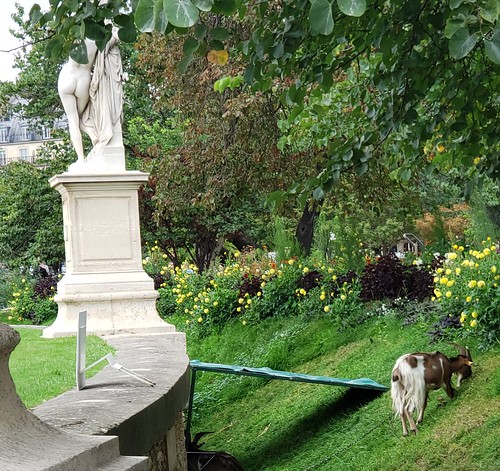