Although my goal was to insure that a Trump lapdog wasn’t elected in November, a goal as yet unmet, I have also among other things:

1. Publicized my own disgust with the worst President ever elected.
2. Put up more than a symbolic fight to his wannabe lackey Pete Stauber.
3. Argued that the long history of the Republican Party deserves better than to end with Donald Trump.
4. Gotten my message broadcast at least in the St.Louis County area.
5. Significantly increased my views of Lincoln Democrat.
and, since my winning has always been unlikely anyway
6. done all this without sacrificing too much of my research and study for a trip to France to honor my Grandfather’s service in World War I.

For the past six years I’ve shelved my plans for a run for Congress a third time. Its such a disagreeable place these days. To be a Republican congressman you must remove your own the brain and replace it with an incredibly fossilized and dimwitted party brain. Then you must spend most of your waking hours (as a big-shot congressman) making telephone calls to rich people begging for money for your campaign starting the moment you win the most recent election. Anyone who wonders at Donald Trump’s winning over of blue collar America should look at one of the best Dilbert cartoons ever. I’ve put it on my desk as a daily reminder of how Joe Six Pack has been screwed by the Republican Party: 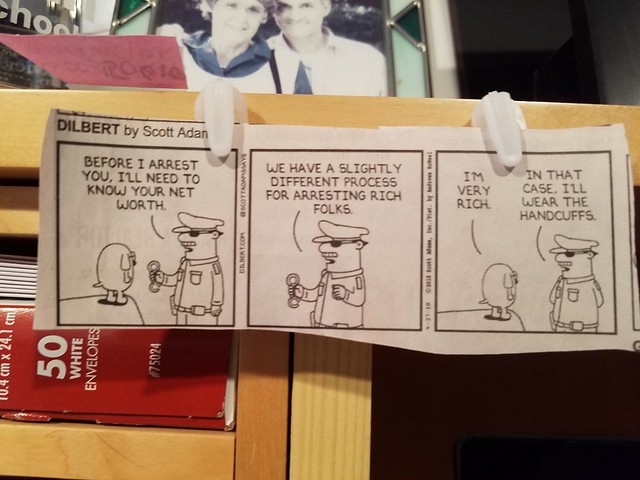 Why should a “deplorable” (Joe Six Pack) trust Republicans anyway? I prefer to believe their voting for the lying, cheating, bragging, draft dodger Donald Trump was an extended middle finger to the Republican establishment. Time will tell if the 79% Republican approval rating for Trump holds up through November. I suspect, I hope, that the majority of the Pro Trump crowd is simply having a hard time admitting to themselves the obvious – that Donald Trump is screwing up the America he boasted he would make great again. I also hope they begin to see that he only ran for the Presidency to get free publicity and make more money. I think he lives by the theory that, unlike other billionaires, God will let him take his wealth with him beyond the grave. Not so fast Donald “What does it profit a man…..”

Today marked a milestone for me. Today’s Duluth News Tribune finally had three monster articles demonstrating the pusillanimity of Donald Trump’s sinking Presidency. Each was the product of the Washington Post which I don’t subscribe to. It was nice to have the Trib transport me past the Post’s paywall.

There was Donald Trump railing about having been snookered by North Korea. (its only in the DNT’s print version)

There was Donald Trump railing about his ex lawyer, Michael Cohen, turning on him.

There was Donald Trump railing about being made to look a fool next to Vladimir Putin.

And for good measure there was a letter to the editor wondering how Pete Stauber could possibly cozy up to such a President as this.

Today’s paper was heartening because I’ve railed several times that the Trib’s editors chose to give no endorsement in a Presidential race in 2016 that pitted an unpopular Hillary Clinton against a grinning demagogue Donald Trump. Here’s one of several such complaints in which I wrote:

“Taking no stand was one way Forum Communications could avoid alienating its tens of thousands of rural Trump supporters. But I think it was stupid as one candidate was so deeply flawed they should have taken a stand against him. In this way Forum Communications was as much a dupe of Vladimir Putin as the gullible folks on Facebook. I know the Trib editors simply followed orders in not taking a stand. In this they simply were claques for [ the] Forum . . .”

I’d like to think that the journalists at the Duluth News Tribune had an editorial board that respected the Press as much as I do. Maybe this Sunday’s paper is a beginning towards making that happy day come to pass.