My Dad, Daniel Marsh Welty, died shortly after we moved to our snow sculptor’s palace thirty-one years ago. He never got a chance to see it although I shot a VHS tape of it to show him where we had moved to. His Vietnam was the “Good War” and for years afterwards he read the memoirs and histories written by men who had fought in it. I kept a bunch of his paperbacks after his death and today I’ve got them arranged in a modest glass case with other mementos of his life. As you can see they include a sketch that my Mother made of him when he was in his late twenties. In life he never looked that fierce. 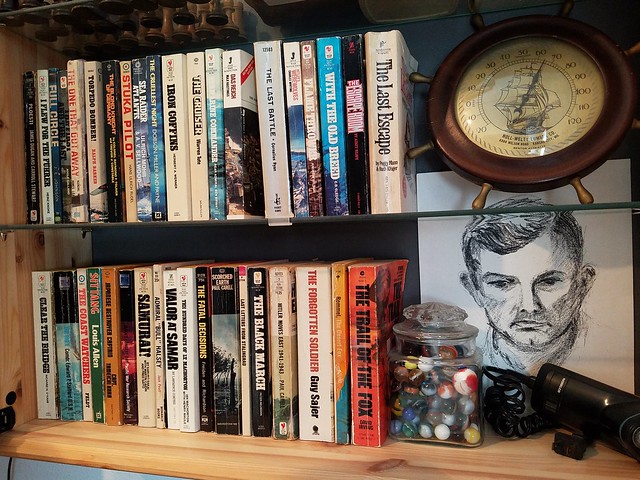 I plucked one of the books from the shelf a couple days ago to begin reading to Claudia in anticipation of our September trip to France and more specifically to the hallowed coast of Normandy. Its Cornelius Ryan’s “The Longest Day.” After beginning its chapter ten in the first section I had to put the book down and shoot a 6 minute video of me reading and commenting on a passage that talked about the modesty of my fellow Kansan, Dwight David Eisenhower. The depths that we have sunk to politically with the Trump Presidency led me to shoot another video to share my thoughts with my blog’s treasured but minuscule audience. I’ll upload it tomorrow.