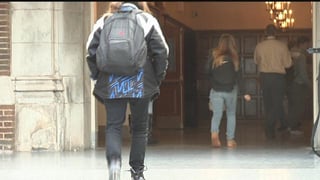 Earlier this week Doug Hasler, the Chief Financial Officer for the Duluth School District, was put on administrative leave.

he’s put a huge black cloud over the first competent finance Director we’ve had in over a decade. The implication on the Superintendent’s vague explanation is that the District found something “inconsistent.” Your damn right there is. The Board wants to spend money that this District was forced to divert to a massive building plan at the cost of hundreds of teachers. Implying that Doug Hassler did something fishy gets the monkey off the Superintendent’s back for a little while.

Until the District spells out just what this inconsistency is I can only assume that the Superintendent needs a scapegoat and he’s running out of them as his top assistants head for the hills. That he would blacken Doug Hassler’s reputation to save his own skin, if my hunch and experience happens to be true, would be despicable. But that’s what I’ve come to expect from our Superintendent’s office.

I was interviewed by KBJR for the Stauber/Trumplestiltskin Hurrah at the DECC the same day this aired. When I was asked about my thoughts because I was on the School Board until January, I couldn’t help but share a clothes-pin with the reporter about the District’s latest scandal. We both needed the pins for the smell.

Any agreement to keep Mr. Hasler’s knowledge of this scandal from the public would be criminal. That’s what I anticipate will happen and its just the sort of specialty practiced by my favorite School District lawyer Kevin Rupp.