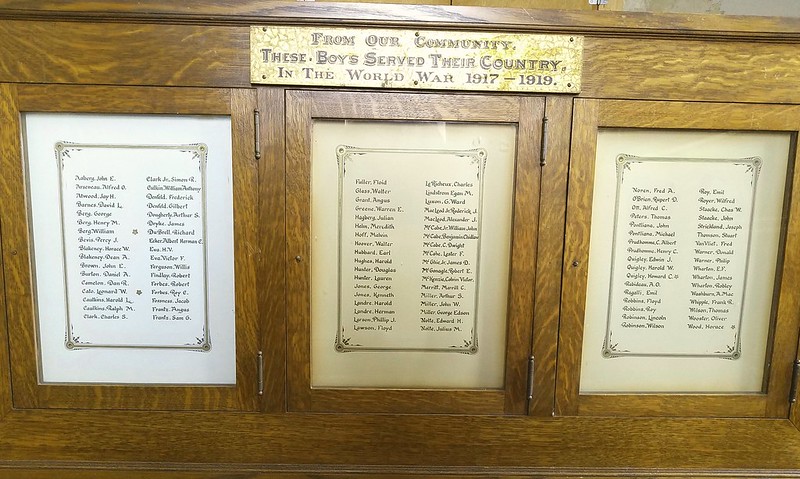 After forty years attending Glen Avon Presbyterian Church, all the while an agnostic non member, and a quarter century in the choir I was asked last year to serve on a committee – building and grounds. I was delighted to be asked and my recent freedom from the Duluth School Board has even made it possible for me to attend the Tuesday night meetings without any fear that they could conflict with our once a week School Board Business Committee meetings.

Among the long standing projects that I’ve had a personal yen to do something about is the space just below our church’s bell tower. For years it was a crowded space with years of detritus accumulated inside. Recently it has had some water damage from water that has blown in through the louvers that offer partial protection to the tower’s carillon. We have a spring cleaning coming up Saturday that I’ve been helping to organize. To prepare for what will only be a morning of work I’ve been hauling stuff from the room below so that our volunteers can reach the walls and repaint them. Having done that I’ve prepping the walls by scraping off moldy paint turned to dust. Its been grimy work requiring a shower two afternoons in a row. Today I will slap some primer/sealer over the spots where I removed all the old paint.

The most interesting thing I discovered was this plaque honoring the members of the church who answered their nations call to arms for World War 1. I asked my wife to put it on the church’s facebook page as a bit of advertising for the Saturday clean up. It seemed fortuitous that I should discover it on the eve of my fall trip to France which is prompted by a desire to honor my Grandfather’s heroics in that war.

I think some of us will try to find a place to put it up once again.

The other thing I found was also yellowed but it was of a much more recent vintage. It was one of a half dozen News Tribunes that were kept for some purpose, goodness knows what. Now they are just something for the Fire Marshall to frown at. I brought this one home as I had stopped collecting Trib clippings about the Duluth Schools after my fight for a vote on the Red Plan had come to an end. 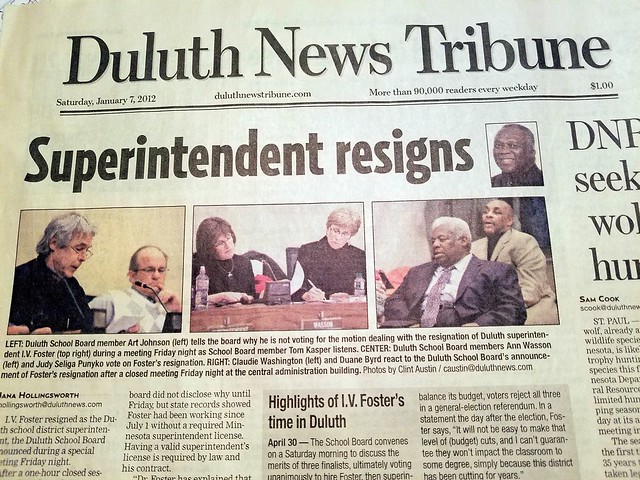 My own view of this sorry bit of history is that it was yet one more miscarriage of justice that typified the leadership of the Duluth Schools dating back to the panicked hiring of Keith Dixon twelve years ago. This still unfolding disaster has been big part of what has animated Lincolndemocrat since its birth in 2006.

Today a new and greater threat, this time to the nation, animates the blog. Both threats have had the power to wake me from a truncated night’s sleep and thrust me into fretfulness that can only be salved by climbing out of bed and heading to my office to crank out new posts.

Its 4AM now. Maybe I’ll try to catch some more zzzz’s before I spend my Friday at church and at the Damiano Center serving up lunch.