A couple of days ago someone anonymously left a very nice gift and a suggestion at my door for a public art project. I took it that it came from a fan of my politics and my blog. It ended with the all caps request/plea “DON’T GIVE UP!! NEVER GIVE UP!!” Taped to the conclusion was a tiny pressed four leaf clover.

I very much intend to honor that plea. It was not really necessary but I appreciated the encouragement. I’ve planned to live to be a hundred since elementary school and in my college years I locked on politics and governance as my mission. I’ve been running for public office since 1976, 41 years ago. As a candidate I’m getting close to my sell-by date but I’m not sure being a candidates is my forte – witness my recent electoral defeat. Still, I think I’ve got more than vapors to run on. When I turned sixty, seven years ago, I presumed I still had another twenty years of sentient life left in me to do something useful. Despite the lapsing of seven years I am still keeping that twenty year horizon in view. Maybe when I turn 90 it will have shrunk to ten years.

Actually, its writing more than sculpture that I think will prove to be my métier. My eight loyal blog readers know all too well my yen to write a book. I yammer about it all the time. There’s a little alliteration in that. Or is that consonance? Its been a long time since my poetry unit in pre-college English.

The Public Art project my anonymous friend suggested to me was one about our tribalism. It sketched out for me two monolithic Easter Island like heads and suggested decorating them with different scarves to depict their mutual antithesis. In the gift bag were two huge, gorgeous pieces of fabric for me (or some sewing adept) to craft into scarves with the suggestion of intertwining them perhaps to hint that the tribes weren’t really all that different.

Well, I am too protective of my fingers to operate a sewing machine and I’m pretty resistant to other people’s artistic suggestions. Besides, a short time later an idea popped in my head that I subsequently put on my front yard that pretty takes sides with one tribe over the other.

Its often said we should not look gift horses in the mouth and I wouldn’t subject this gift to that kind of inquisition. I haven’t figured out what to do with the bolts of cloth but there were two other gift items I plan to use. One was a tea towel with “this is my protest dish towel” emblazoned across it. The protesters on it were doves which are famous for their moderation. I liked it. I’ve always considered myself something of oxymoron, in my case a “militant moderate.” I could be a petulant dove.

The other gift was a very loud pair of orange socks with the image of a fellow fighting a lion. Its legend said: “Thou hast balls.”

Oh, and if anyone would like to have some very beautiful fabric send me an email at: harrywelty@charter.net 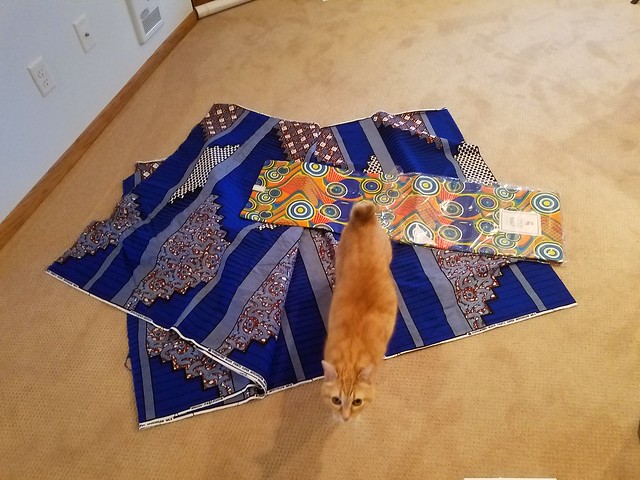 My cat Moloch likes it too.